The Little Things You Do Together are not so little when delivered by John Pizzarelli and Jessica Molaskey.  Returning for their 12th annual visit to the Café Carlyle, these two are a reminder that there are some very fine doings around town despite what we see on our daily news briefs.

The Little Things You Do Together (Sondheim) opens the show, tweaked with a few new and seamless lyrics.  These two know of which they speak and of which they sing.  Their duets are sublime and based on years of creating: marriage, family and music.  They Can’t Take That Away From Me is delivered by what should now be called the official Pizzzarelli Trio.  Mike Karn on bass (and wearing his brand new tuxedo) and Konrad Paszkudski on piano (old tux but a fine pocket kerchief) provide the absolute perfect balance for Pizzarelli’s masterful guitar work.  This is a threesome that shines.

Molaskey returns to join the vocals with A Fine Romance (Kern/Fields) – also with new lyrics slipped in so seamlessly it takes a while to figure out they are there.

In their 12 years at the Carlyle these two have performed through three Presidential elections, Hurricane Sandy and the crash of 2008.  Referencing all of that is Blizzard of Lies (Frishberg and Frishberg) which is a rapid-fire list of the most popular lies we hear.  This was the only number that fell flat because none of those common lies (a la “The check is in the mail”)  measure up to the claptrap that spews out of the White House daily.

A brilliant gift is next with Molaskey’s version of The Last Time I Saw Richard (Mitchell) and The Dry Cleaner From Des Moines (Mitchell/Mingus) which are on her new album Portraits of Joni.  She knocks both of the park with her crystal voice and her singular delivery.  Pizzarelli may be the troubadour, but Molaskey is the tapestry weaver. 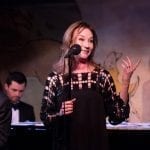 Antonio’s Song (Franks) , from Pizzarelli’s new album Sinatra and Jobim at Fifty is a sweet and thoughtful homage to love’s memories as well as possibilities.  It is is more or less dedicated to Jobim in deed and sprit.

Baubles, Bangles and Beads continues the Latin flow and gives the trio yet another opportunity to sparkle.  Stunning work.

Not Getting Married Today is a perennial favorite (Hendricks/Sondheim) in which they have combined Cloudburst by Jon Hendricks with the aforementioned by Sondheim.  On the one hand a snappy dude is pursuing a love affair with all the enthusiasm of a new puppy.  On the other hand, a woman is on the verge of walking, not down the aisle but rather out of the damn church altogether.  This is a perfect car crash of a song.  Hilarious and tender.  We have all been on both these sides.

Pizzarelli takes a turn at Finishing The Hat, turning the tale into a ballad of exquisite perception. 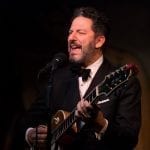 John Pizzarelli at the Carlyle; Photo by David Andrako

Acknowledging that “these are difficult times, especially for those of us who are co-dependent” (did I mention these two are f-u-n-n-y?) they pair I Want to Be Happy with Sometimes I’m Happy – Paszkudski and Karn pretty much leave the planet and take us with them – it is a brilliant pairing.

Not for nuthin’, but every time I have seen these two perform there is always one song, if not more, that puts me under the table.  I am reduced to protoplasm.  Last year it was their opening song which Molaskey wrapped around us like silk cloth.  Their 2016 opening date came not long after the tragic presidential election.  We in the audience were the walking wounded, and Molaskey’s Hope by Jason Robert Brown ) was balm to our wounded spirits.  This year the song was Children Will Listen (Sondheim) which is a song about love, of course.  But it is a triad love.  Love of a mother, a daughter and a wife, and oh yeah that guy…..  Lead by Molaskey with sweet subtle support from Pizzarelli – it slayed us all.

Paul Simon’s Boy In The Bubble is a surprise and a half.  Facts and hope in the face of – well, you know. Molaskey gives it to us like a reassuring kiss on the forehead and swings directly in to Gone At Last (Simon), because well, the roof needed raising.

Pizzarelli closes with I Like Jersey Best, which is a light and hilarious romp through all that is great about New Jersey.  He performs this on opening and closing nights only.  He does not skimp, and the homage is a full throttled SEVEN minutes.

Just go.  It’s November.  Wash the taste of the Election Massacre Anniversary out of your mouth with a very dry martini and a side of Pizzarelli and Molaskey.  These two are good for what ails us – all of it.  Your host Gogo, waiters Tom and Erol, bartender Rashid and their crew will take good care of you.  And Darwin will make certain that the sound is just right.  The Café Carlyle is an instution that has remained standing for several decades. It is a welcoming respite for a weary traveler no matter the season or the year.  You deserve this.

The Little Things You Do Together, November 7-18. At the Café Carlyle

Important Hats of the Twentieth Century