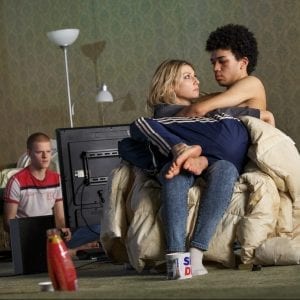 YEN a new play by British playwright Anna Jordan  opens on two teenage half brothers in a town outside of London who are left to fend for themselves by their addict, diabetic, deadbeat mother (played with brittle-bone desperation by Ari Graynor). They live in a two room flat that she pays for with her benefit checks. They live in only one room of the flat with a TV and couch and one shirt between the two of them. The boys, 16 year old Hench played by Academy Award nominee Lucas Hedges (“Manchester by the Sea”) and 14-year-old Bobbie, the outstanding  Justice Smith (Netflix “The Get Down” ) spend their days watching endless porn and playing video games. Mom does drop by every now and then, strung out and needy; she is there to get some love and “cuddling” from her youngest, Bobby, and whatever money the boys may have. In the other room of the flat is their dog; the neglected German Shepherd named Taliban, whose barks are exclamation points to the boys yells and screams, and cries of anger and anguish.

Things change when their neighbor, 16-year-old Jenny, nicknamed “Yen,” (the captivating Stefania LaVie Owen), enters their world. She is there to save Taliban. She can see the poor creature from the window, and as an animal lover she wants to rescue him. What she doesn’t know is that he is not the only “animal” in the flat that needs rescuing.

It is the arrival of Jenny that turns the play into something more than the yelling and gnashing of teeth.  Here is where poetry begins and here is where we start to care, to listen – leaning forward, drinking in the words and emotions played so beautifully by this flawless cast.

Hench, played so exquisitely by Hedges, wants the love that Jenny is offering, but his demons get in the way, and trigger the horrific twists and turns that take the wind out of them all.

“Yen” we are told is not just the name of Japanese money, but also means “longing”.  A longing all the characters have for some kind of love, for those lost to the hardships of their status. They are the ones left to live in poverty, in a place where they will destroy not only themselves, but others. Again and again.

In YEN it is the quiet, painful moments of longing where the writer, actors and director all shine. That light is the light we hold up in darker moments for direction and hope.

Between Riverside and Crazy 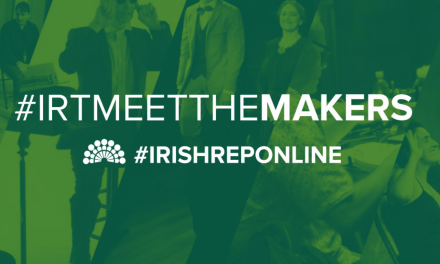