Marianna Mozart was the older sister of Wolfgang Mozart. On her gravestone is etched “Maria Anna von Berthold zu Sonnenburg. The sister of Wolfgang Amadeus Mozart”. In the same graveyard is another stone that reads “Michael Haydn. The brother of Joseph Haydn”.

So much for living in your sibling’s shadow.

The Other Mozart is a story gleaned from scraps of history. As the director Isaac Byrne told us, Sylvia Milo, herself a musician, came upon the portrait of the female Mozart and was shocked that she knew nothing of this woman who was an accomplished artist. Milo set about researching, and this production is the result of her years of work.

Nannerl, as Mariana was called by her family, wanted to play the harpsichord from the moment she heard it. Her father forbade it until she was 8. By this time her brother Wolfie was roughly 4 and was allowed to share the lesson. Four was not too early for the boychik! His total mastery of the music combined with Nannerl’s gift for interpretation turned them into a dog and pony show that toured the finest cities in Europe. In Vienna she met Marianna Martines (of whom you have also never heard) and takes her as an idol. Martines was a noblewoman who, because of her independence, was allowed to compose and perform publicly – never for money of course.

When Nannerl turned 15 she was pulled from the circuit never to return. What she was meant to create were children, she was told. As a doctor remarked to her parents, “A woman’s energy and blood are pulled away from the brain by the … uterus…making sustained intellectual…concentration…physically and psychology…dangerous!” The text is peppered with similar quotes by, among others, Kant and Rousseau. And of course the Mozart’s father Leopold, “Nannerl you have talent.” “My son, you are a genius.”

For the rest of Nannerl’s life she was inundated with news of her brother’s successes, and could only respond with weather reports as she was allowed no creative success. In this production she dwells on the question of what would have happened had she been allowed to share her gifts along with her brother. The tragedy here is not only hers, but the family’s loss. Her mother died accompanying Wolfie on a tour. He himself, although prolific in his writing, never achieved the stability or financial success he deserved and died at the age of 35. What if Nannerl had at his side as an artist? Would they have achieved a mutual success and had one another as allies?

After a brief period when she was invited to join Wolfie and their father, but not to perform, Nannerl eventually married a baron who seems to have had little interest in, or care for, her. She raised his four children while giving up her own.

She lived to be 78 and did have the pleasure of teaching, but never the pleasure she really desired. Because of her care we are blessed with a treasure trove of Mozart’s letters that she saved. He did not return the favor as there was nothing of interest in her letters – even in her own opinion.

The play is presented on and within and extraordinary skirt/set designed by Magdelena Dabrowska and Miodrag Guberinic that is meant to embrace the mountain of correspondence as well as the sheets of music the siblings shared.  It is intriguing at first, but then becomes more than a metaphorical weight as it limits the movement of the actor.  In addition, while Isaac Byrne creates a symphonic flow for this piece, it is hindered by the choice to use a variety of accents – unnecessary when a play that is meant to represent many languages is delivered entirely in English.  The audience knows the conceit. We don’t need musical accents to convince us.

On the day I saw it, the understudy Julia Rosa Stöckl was playing Mozart. Stöckl is a vibrant sparkling woman whose acting skill is evidenced by the fact that when she appeared in the talk back after the show, no one knew who she was.   As to the piece itself Stöckl at times appeared uncertain of her choices (and again the massive garment takes some maneuvering) and I expect that the more she performs this work, the more she will make it her own, and this will be a pleasure to watch.

That Ms. Milo is a devoted historian is evidenced by the text.  The nut to crack, however, when writing history as entertainment is to make a story out of what was a series of facts. A writer has to create a plot out of life, which is often plot-less. Ms. Milo is unable to do that here, which does not stop her from plunging in to the void left by the omission of Marianna’s presence at her brother’s side on the world stage. It is a shameful loss, and Milo gets that point across in spades.

Those of you who know little or nothing of women’s history will embrace this production with new eyes. I am in the minority here as my knowledge of this subject is greater than most, while still not vast. Therefore I was sensitive to the fact that the text of this show is a litany of facts (although many are fascinating glimpses into the backstage of history).  We learn only what happened to Marianna but little of what decisions she made for herself.  After all, this was a woman of determination as well as skill.

What will stay with most people is the magnitude of this story. Many people in the audience were openly weeping by the show’s conclusion. We have not come so far from the days when the Greeks though the uterus was a free moving part of the body. An animal within an animal that could cause great disturbance if left unattended. Translation: women did amazing shit when they gave birth and men are still working out how they can control THAT juju.

While this production is not as vital as the story itself, it will nevertheless inform and possibly transform how you view not only music of old, but the present day as well. That is an excellent achievement on its own, is it not?

THE OTHER MOZART – written and performed by Sylvia Milo, Directed by Isaac Byrne 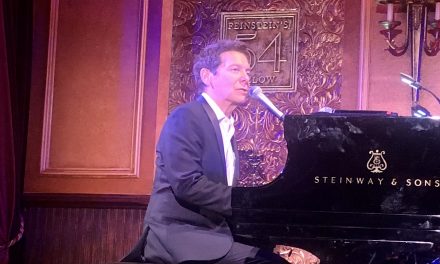 The Painted Rocks At Revolver Creek