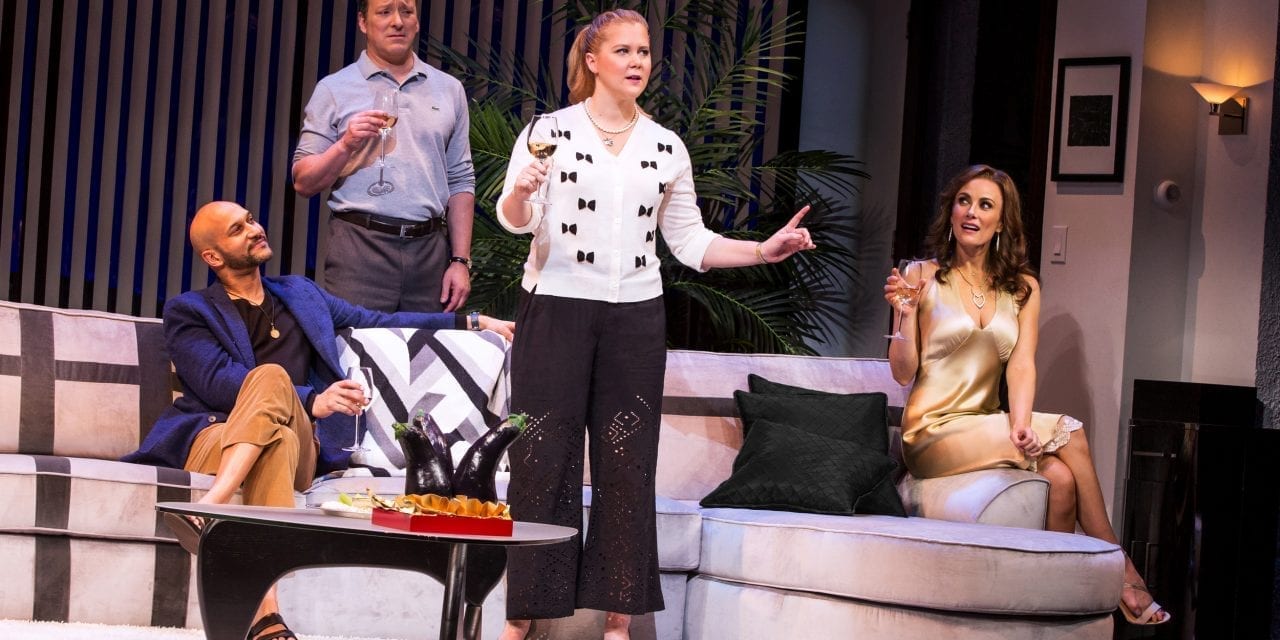 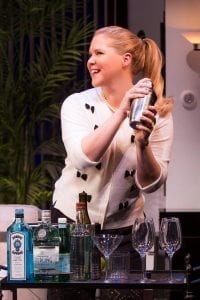 I wish I had more to say, but I’ll admit that I am at a loss for words after seeing “Meteor Shower,” Steve Martin’s absurd new comedy at the Booth Theatre.  What does one say about an entertainment this lightweight, this pointless, this short?

I could start, I suppose, with an observation about the splendid cast and design team assembled by Jerry Zaks, the director, and the surprising amount of theatrical talent that has been squandered upon this absurdist soufflé.   Or, I could just jump right into the issue of high expectations and low return; this production had one of the highest advance sales in recent memory, making it difficult to score a ticket, and even though the show is just slightly more than an hour long, it is still going to cost you about $2.50 a minute to sit in your seat and watch it. If you want any real return on that investment, I would start laughing on my way to the theatre, if I were you. Once you arrive, there are plenty of occasions to laugh, since Steve Martin has always been funny, and he has given his characters some very clever things to say. But the collection of funny bits and silly pieces of action that comprise this short evening in the theatre do not, at the end of the day, a whole play make.

So, let’s start with that. Set on a summer night in 1993 in a stylish modern house (with large windows, naturally) on the hills above Ojai, California during a display of the Perseid meteor showers, Norm and Corky (Jeremy Shamos and Amy Schumer) are expecting guests. Boy, the couple that arrives couldn’t be ruder or more aggressive than Gerald and Laura, played by Keegan-Michael Key and the astonishing Laura Benanti, unwelcome interlopers right from the get-go, but Norm and Corky put up a good front, what with all the ensuing social discomfort and awkward moments that arise as the guests become increasingly aggressive, verbally and sexually. Shamos and Schumer haven’t been given very deep characters to play here, but they still manage to make comic hay out of their reactions to Gerald and Laura’s bizarre outbursts, and that is pretty much the rest of the play, until one of the characters gets hit by one of the – oh, never mind. Let’s just say, about halfway through this, it becomes clear that we are watching a cartoon, not a play about real people, and that it’s a battle between Norm and Corky and their subconscious selves, and the tables are turned on the guests at the end under the vista of meteors streaking across the starry nighttime sky, and we are let out of the theatre early, with the rest of the evening still ahead of us. This is definitely a show where you will want to make plans for after the show.

That’s all I’ve got. For people looking for a lightweight diversion prior to dinner, preferably with some laughs, this 80-minute, intermission-less confection with a seven o’clock curtain would seem to be the perfect occasion to dine at your favorite midtown restaurant while everyone else is still at the theatre, but at just under $200 a ticket, that could make it the most expensive canapé hour in town.

Michael Hillyer was an Associate Director at the 29th Street Rep, Blue Heron Arts Center and the Wings Theatre Company, and has directed elsewhere in New York at Playhouse 91, Theatre For The New City, the William Redfield Theatre, Douglas Fairbanks Theatre, the Nat Horne Theatre and the Irish Arts Center. His long-running horror-movie send-up at the American Renaissance Theatre, SLASHER, THE SPLATTER ROCK MUSICAL, was revived Off-Broadway at the Perry Street Theatre, choreographed by Susan Stroman. He has also directed at the John Drew Theatre, Millbrook Summer Playhouse (Morning's At Seven), Thomaston Opera House (Born Yesterday), the Palace Theatre in Stamford, CT (The Boy Who Cried Elvis), the Palace Theatre in Manchester, NH (Shenandoah, Man Of La Mancha), as well as at Cornell, Columbia and Seton Hall Universities. A former long-time member of SDC, he has written articles about the New York theatre scene for Backstage and The Village Voice, and is currently a member of the American Theatre Critics Association. 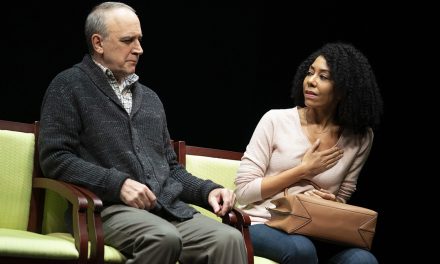 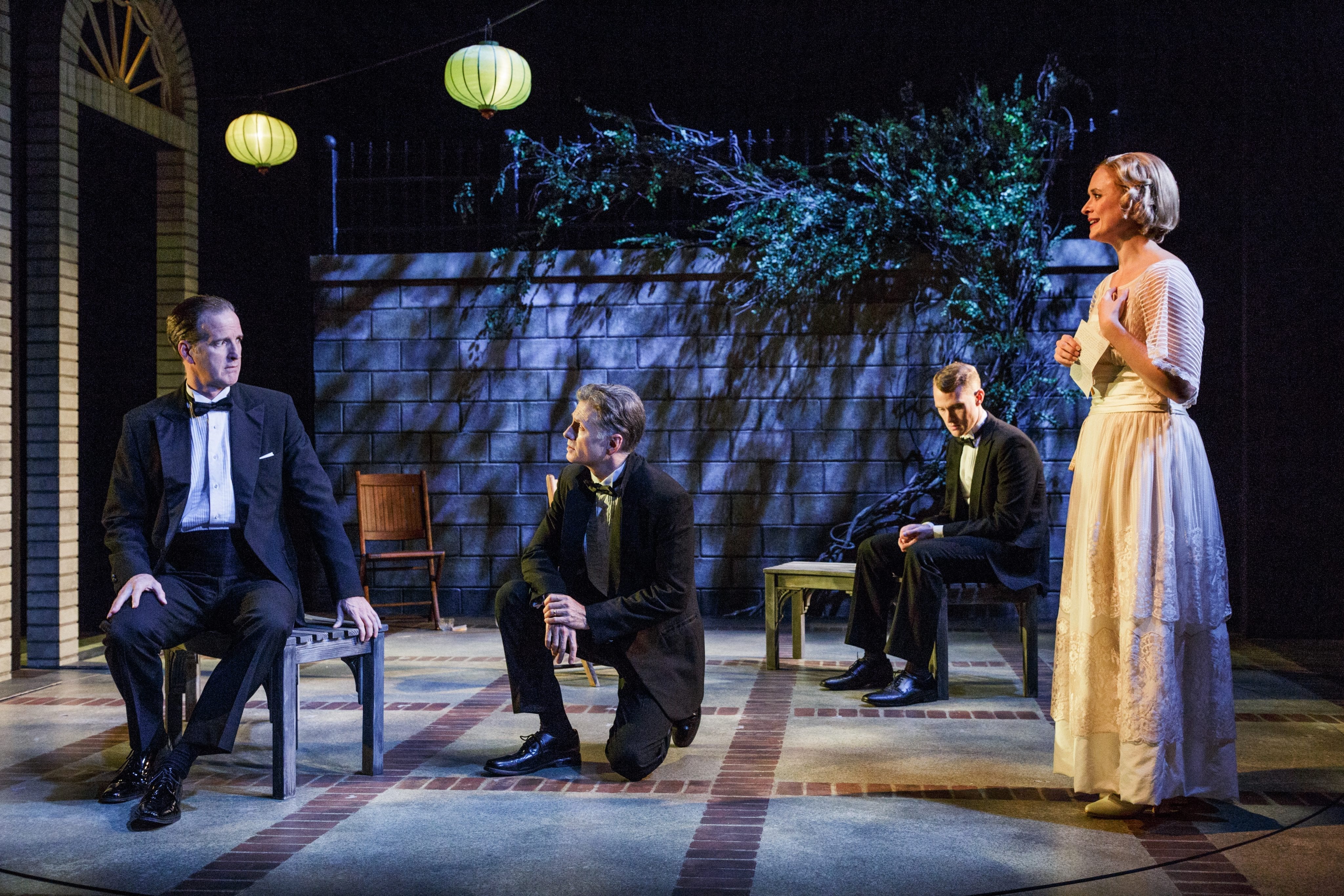 The Roads To Home