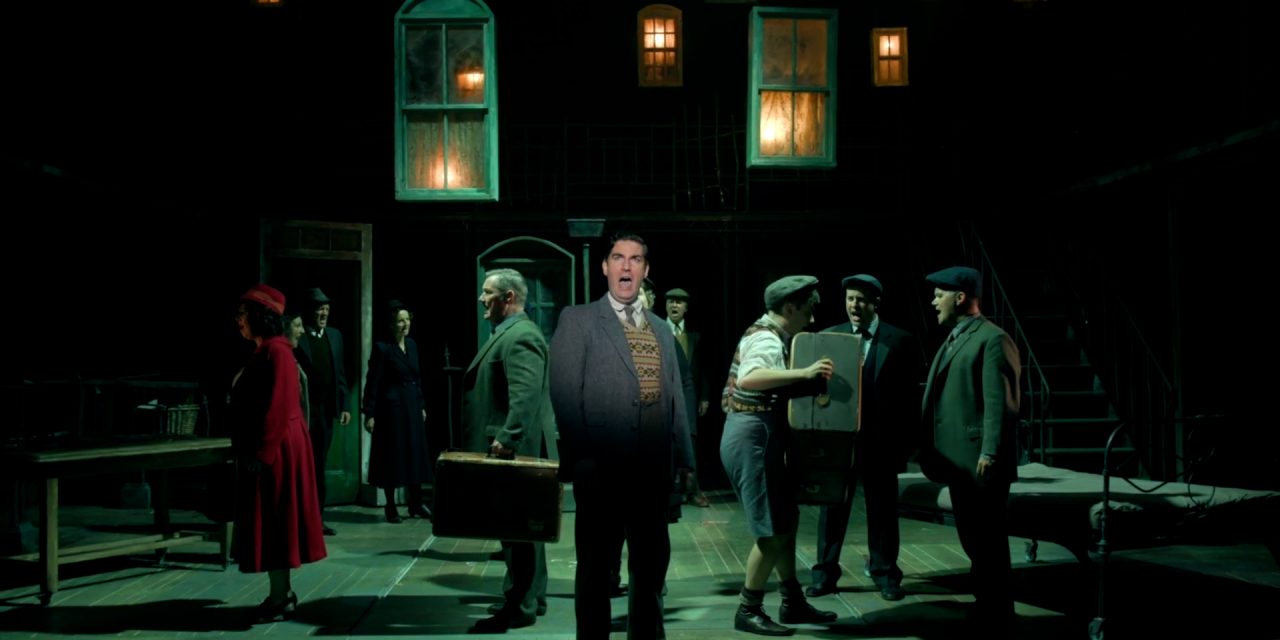 I just finished watching Angela’s Ashes: The Musical presented online by Irish Repertory Theatre and, my head is swimming with thoughts, images, and songs from this heart-wrenching, remarkable production. It is the filmed production of the staged play at the Olympia Theatre in Dublin, Ireland. The performers, musicians, and crew all came together to perform this extraordinary show to a house made up of you and me, made up of and for all of us.

Angela’s Ashes: The Musical is a treasure, gift-wrapped in astonishing music, story, and superb performances. Based on the Pulitzer Prize-winning memoir by Frank McCourt, it is McCourt’s story of growing up in Ireland during its Great Depression. It is a story of hunger, of shame, of community and humor, of resilience and love. The memoir is dark and often difficult to read. The hunger and pain of the people on the page seeping into the skin. The film version didn’t stand up to the story. It is this, the musical, where the story truly finds its ground, its soul. Here Angela is front and center and played with heart-wrenching perfection by Jacinta Whyte as the symbol of Ireland itself. It is Angela’s heart that beats throughout the production through the loss of her children, her husband, her pride. She begs for food for her family and even takes up with a local older man who promises a roof over her head and her family’s in exchange for her body. She does what she must to keep herself and her children alive. She is the motherland, the country’s pride and desperation.

Our guide and narrator is Frank himself played with lyrical perfection by Eoin Cannon. We follow his telling of his childhood that was, “…a miserable Irish Catholic childhood…A happy childhood is hardly worth your while.” Born in Brooklyn, Frank’s family is forced to head back to Ireland, to Limerick, the home of Angela. It is his father’s drinking that is the undoing of the family, that and the Irish prejudice against those from other regions of the country. Malachy McCourt Sr. ( the superb Marty Maguire) is a northerner and those in Limerick do not abide by such people. No one wants to give a northern man a job. His search for work is fighting a losing battle and drink covers the battle-scars. He can be for a night in a pub a big man, a man with pride.

Someone once asked, “When do memories become history?” Frank’s memories are part of the history of Ireland, of the immigrant who sees America as the land of plenty where no one goes hungry. Where there is work with a good wage and laughter abounds. It is the people Frank knew as a child in Limerick that he carries with him when he crosses the ocean back to America and one day, one day he will immortalize them on paper, giving them to us. The ensemble embodies these memories. They are breathtaking. They shine, radiate. They are lightning bolts lighting up the sky.

Angela’s Ashes directed by Thom Southerland moves like a fireball, a 100-degree blast of air blowing in one trouble after another to the McCourt family and to all of Ireland. It is encased in Irish toe-tapping knee-slapping music with lyrics that are waterfalls of emotions. If you ask if this is one of the best performances you can see this year or any year? My answer is, “Tis.”

Angela’s Ashes will be available on-demand HERE through Wednesday, September 22, 2021.

The Last Days of Judas Iscariot