The Treasurer by Max Posner, currently at Playwrights Horizons, is a small gem of a play.  Dark, funny, and disturbing, the play seems too insightful for a 28-year old to have been its author.  But then, the playbill notes and opening monologue by the main character reveal that the subject is autobiographical, so it makes sense.

The Treasurer feels almost more like a confession than a play.  I hadn’t read the playwright’s notes in the playbill before the play started, but I was not surprised by them when I read them afterwards.  The Son (Peter Friedman) basically tells us in his opening monologue that the subject matter of the play is based on the playwright’s life.

Everything starts abruptly.  One moment you’re fidgeting in your seat, talking to whomever accompanied you to the theater, and the next moment, The Son is standing on stage talking to you.  The house lights are still up, and the lights on stage have not changed from their preset.  He stands at the edge of the stage, and he is breaking the fourth wall and talking directly to the audience.

It’s a monologue that goes on for over 6 pages in the script, and such is the felicity of collaborative genius at work, the inspired words of a fresh young playwright in the mouth of a seasoned, nuanced actor combined to make arresting, exciting theater grab us and not let go.  I knew I was witnessing something real as the story of the middle-aged Son and his elderly mother unfolded.  A self-confessed happy man, suddenly forced to be the caretaker for someone who had been careless with his well-being at a tender time in his life.  And now forced, at a time in his life when he thought he had the rest of his life settled and mapped out, to confront some ugly truths about how he feels.

The action of The Treasurer jumps back and forth from The Son breaking the fourth wall and talking to us, the audience, to scenes in situ, as it were.  We meet Ida Armstrong (Deanna Dunagan) in her house in Albany, and we see The Son talking to his brothers Allen (Marinda Anderson) and Jeremy (Pun Bandhu) on the phone.  We see scenes in stores and restaurants with various combinations of characters, but it always jumps back to The Son, talking to us, the audience, and narrating what he is doing at that moment.  He’s riding a bike, he’s turning right, he’s turning left.  He’s at a red light.  While he’s telling us something about himself, or his mother, or his wife Nora or her hairdresser Ricky.  Which is why it feels so confessional, so intimate.

The scenes are fast and furious at times, and the settings hop from Denver where The Son is; to Albany where Ida and Allen and Julian are; to various stores in Albany, a house in Tampa, a restaurant in Albany, an airplane, and an elevator.  David Cromer has done a masterful job of staging all this seamlessly with the adaptable, minimal sets designed by Laura Jellinek, Bradley King’s clever lighting design, and Mikhail Fiksel’s cheeky sound design.

Kudos too to Marinda Anderson and Pun Bandhu who play a handful of characters between them, with an able assist from pitch perfect costumes by David Hyman and excellent wigs by Leah J. Loukas.  Each of them managed at least three, if not more, quite distinct characters that looked, sounded and acted not at all alike.  Bravo.  And a huge hand to the incomparable Deanna Dunagan who was chillingly realistic in her portrayal of the vulnerable but self-centered Ida. Quite frankly, I can’t say enough about Peter Friedman’s performance in The Treasurer.  He is an actor’s actor.  Without chewing the scenery or “telegraphing” his emotions (the bane of every acting teacher who ever lived), you can see everything cross his face quietly.  Every breath, every pause, conveys precisely what he’s thinking and he is a joy to watch.

The Treasurer by Max Posner, Directed by David Cromer

An American in Paris 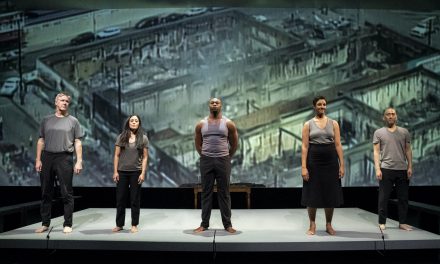