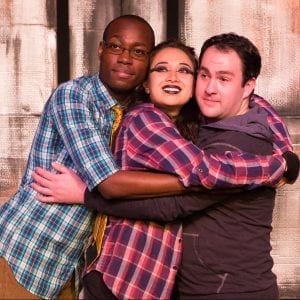 If you’re a Harry Potter mega fan who has read all the books every year since they’ve been released like my friend Katy, you’re going to love Puffs or Seven Increasingly Eventful Years at a Certain School of Magic and Magic.  Do you have your own wand? Run right out and buy a ticket, don’t bother to read the rest of this review.  If, like me, you read the books as they came out and enjoyed them, but haven’t felt the need to revisit Hogwarts again and again, you’ll enjoy the show. But you may not understand why the audience is laughing at some points.  If you’ve heard of Harry Potter but the word Hogwarts is totally foreign to you – Puffs will leave you scratching your head.  You’ll feel a little like Tarzan would if he was kidnapped and woke up watching the movie “Tootsie.”  No context for anything that was happening around you.

But I don’t mean to give you the wrong idea.  Puffs is not a story about Harry Potter.  It’s a story set in Hogwarts during the time that Harry was there but it’s about other people.  It’s a way for fans of the books and movies to revisit their favorite place from a new perspective. And it can be appreciated on both a macro and a micro level.  On the macro level, it’s about a boy named Wayne (Zac Moon) who is an orphan and living in New Mexico with his Uncle (Nick Carillo) when an owl drops a letter on his head that informs him he’s a wizard and to report to school in England.  When he confronts his Uncle about the letter his Uncle says “Oh my Gawd! I forgot to tell you. Yer a Wizard, Wayne! Also, wizards exist! And you are one. Just like yer British parents. AH shit! Yer parents were British! Wow. We got to talk more. Come on, I’ll drive ya to the airport!”

At Hogwarts, Wayne gets sorted into the Hufflepuffs, the loser house, whose aspiration is to be third in a field of four.  There he meets Oliver (Langston Belton), a math whiz kid who was also shocked to find out he was a wizard, and Megan (Julie Ann Earls), the angsty daughter of a mother who is in jail for being a follower of He-Who-Cannot-Be-Named. Wayne and Oliver go searching for Megan when a troll gets loose even though none of them should be roaming the corridors. They all go in front of what they call a “weird mirror” have their secret desires revealed, and wind up becoming best friends. All macro level fun that parallels events in the original first book.  With the help of a Narrator (A. J. Ditty), the action of Puffs goes through the 7 years of school and the 7 books in a rollicking 90 minutes, with the action of the Puffs kids being affected by school-wide events readers will be familiar with, but from a different perspective.

But on the micro level, if you know your stuff, you’ll find yourself in the middle of a treasure hunt.  For instance, you’ll know that in the books, the name of the Mirror of Erised – which reflects the deepest desires of the anyone who looks in it – is “desire” spelled backwards.  And if you’re paying close attention when you’re watching Puffs, you’ll notice that written above the mirror is “Driew Rorrim.”  Yup, “Weird Mirror” spelled backwards.  And you’ll also know when you come in the theater that yellow and black are the house colors of the Hufflepuffs which is why there are yellow penants hung all around the theater, along with pictures of badgers, the their mascot.  And you’ll get that the quick one-liner when Megan finds a red stone in her pocket while looking in the mirror and doesn’t know what it is or what it’s doing in her pocket and throws it away, is actually the all-important Sorcerer’s Stone that is in the title of the first book “Harry Potter and the Sorcerer’s Stone.”

The writing by Matt Cox is crisp, funny and on point, director Kristin McCarthy Parker keeps the pace rolling along at a good clip, and the cast is uniformly excellent.  If you’re a fan on any level, go and enjoy. And know that there are family-friendly weekend matinees for the kids.  If you don’t know from the magical world of Harry Potter, you’re probably going to want to skip it.

Puffs or Seven Increasingly Eventful Years at a Certain School of Magic and Magic by Matt Cox, Directed by Kristin McCarthy Parker 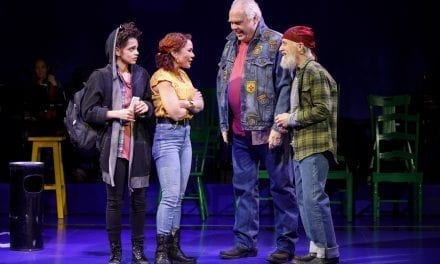 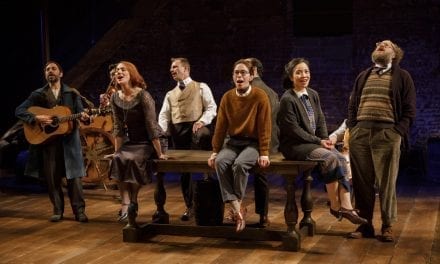 Twelfth Night, Or What You Will