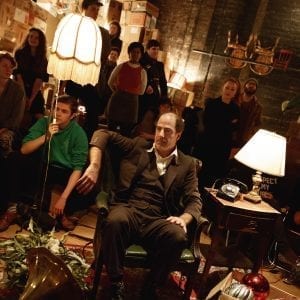 Geoff Sobelle is a scamp.  He is a voyeur.  He is a magician. He has practiced being charming until it has leeched into his bones.

He is also very, very smart.  Not to mention a set and lighting designer’s dream. With The Object Lesson, now at New York Theatre  Workshop, Steven Dufala has won the trifecta in this department, although I suspect it was a collaboration executed with more than one bottle of wine at hand.  The “set” has taken over the entire stage space at New York Theatre Workshop.

A special kudo goes to NYTW who, time and again, has entertained productions that have allowed creative teams to remove every stitch of audience and stage detritus in order to create a blank canvas.  Caryl Churchill’s ONE, Hedda Gabler, Scenes From A Marriage, Valhalla – memorable and mind shifting all of them.

As you enter the theatre for Object Lesson,  you are encouraged by the staff, and a little hand-out instead of a program, to explore the space, and by that they mean you can open any box you see, including the one that says DO NOT OPEN THIS, and you can take anything you want and give it to anyone you want.  The people near me ended up wearing derby hats and enormous wooden Dutch shoes.  There are no seats except for the few chairs and sofas, and without a word the entire audience finds seats by testing the sturdiness of boxes.  Small boats and bicycles hang from the ceiling.  There are upwards corners where it is difficult to determine if what you are looking at is part of the set or part of the theatre’s ventilation  system.

Mr. Sobelle wanders among us without incident.  I could not tell if people recognized him or if his interactions were the normal banter of audience members.  The space is so vast that it becomes a humming casino without the pumped in oxygen.

Slowly Sobelle takes focus and creates a sitting area for himself.  A couple of old lamps, a comfy fat arm chair, a gramophone.  He puts the needle to the record and we hear Chopin.  Quite a lovely recording.  It is peaceful for a minute or two.  Sobelle reaches into the horn of the gramophone and withdraws – egads – a small tape recorder. That (with some unidentified amplification) is what we were listening to.  He records his thoughts that are spare, and we follow like children on a mystery tour – because we are.  Sobelle establishes his hold on us with a gentle touch.

His rambling ends abruptly.  He makes a call.  The voice on the other end, it soon becomes clear, is responding to Sobelle with the exact phrases that he himself just “recorded”.  Not in the same order, but we recognize them.  And there we are caught in the finest of nets, placed exactly in the center of Sobelle’s magic spell.  Delighted to be so.

Having secured us like a flight attendant on the way to Mars, Sobelle leads us on what appears to be a random journey.  Part clown, part jester, part trickster he sails from box to box.  Memories waft up like smoke from a campfire (and indeed the lighting often suggests the same).  Audience members are recruited and cherished.  More phone calls.  We loop out and around and back on ourselves.  Everything is not as it seems and is precisely as it seems.

The performance concludes with one of the b-e-s-t magic tricks I have ever seen.  What this man pulls out of an empty box is beyond the beyond.  Unfortunately, it is also one of the l-o-b-g-e-s-t tricks I have ever seen.  Sobelle lost me way before he was done with me.  And one other tidbit – the sight-lines are not so good if you are seated on the main floor.  Much of this action is performed seated, and you will lose a lot.  An odd oversight for a magician of such vision.

So get a ticket for this limited run and sit as high up as you can – literally and figuratively.

The Object Lesson; Written and Performed By Geoff Sobelle; Directed by David Neumann

Through March 19th at the New York Theatre Workshop.  For tickets click here

Ready For The River 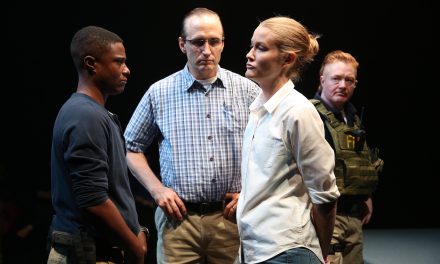 Is This A Room 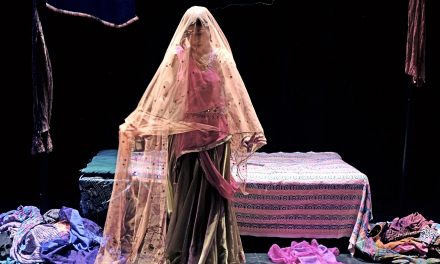 Honour: Confessions Of A Mumbai Courtesan