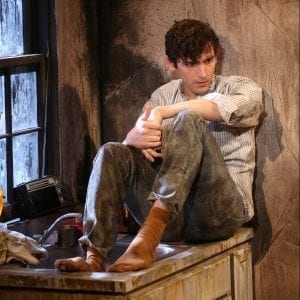 How to summarize Crackskull Row, Honor Molloy’s cautionary tale currently seething away in the eerie basement theater at the Irish Rep? Imagine a bizarro world version of A Christmas Carol with Scrooge replaced by a financially and morally bankrupt old woman, haunted by the sins of her past. Her ghostly visitors include an abusive husband, a daughter that never was, and a son whose foot fetish is the least of their shared problems. Instead of Christmas, it is May Eve, the Irish night of the dead. Instead of goose, there is gore.

The setting for this night of dark secrets, time travel and score settling is, to quote the author, “a shitheap.” As designed by Daniel Geggatt, it is a rundown hovel furnished with a couch propped up on stacks of books, and decorated, unexplainably, with two amber road construction lights that blink out their warning. This is the long-time home of Masher (Terry Donnelly as the used up hag, Gina Costigan when she was known as Dolly, a young floozy), the former home of her son Rasher (John Charles McLaughlin as a troubled teen, Colin Lane as the ruined adult he becomes), the sometimes home of her husband, Basher (Mr. Lane again, and a basher indeed), and the never home of her maybe daughter, Wee Dolly (Ms. Costigan again, dripping blood from her fingertips).

To spell out more of the plot is to give away its dirty secrets. Suffice it to say that director Kira Simring and her talented cast manage the nifty trick of creating a path of destruction that is both in and out of time. Viewed with one eye shut the story could take place entirely in the minds of Masher and Rasher. With both eyes open, it is a brief family history flavored with a Martin Mcdonagh-esque sensibility of perversity and violence. The double casting adds to the mind warp. Scenes between Dolly and young Rasher are extra creepy because they seem too close in age. And Mr. Lane gets to portray the victimizer of his own victim. When Basher comes home drunk with a large pram and even larger sword in tow, we know that things are not going to end well.

Ms. Molloy writes with a poetic sensibility, a fondness for puns and an ear for metaphor. Twice, the word “scar” is uttered instead of “star.” An empty fiddle case sums up Basher, but remembering better days, Masher recalls how “he put my hands into this fiddle case…says feel that….that’s you…the velvet-soft red of you.” And that old couch, missing its feet, is symbolic as well. A lack of decent shoes makes young Rasher’s life a burden, even as he covets his mum’s high heels. And ghosts, when they arrive, tend to show up barefoot (and sometimes, wondrously, from out of the fireplace) while Masher, herself, can barely prop herself up on her exhausted legs. Despite the street name of its title, these lost souls of Crackskull have nowhere left to run.

Richard III (an all female cast)

An Evening WIth Shirley Jones 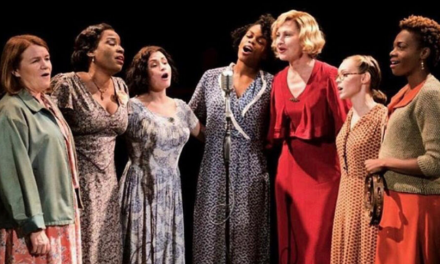