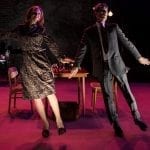 Bond and Lauren burst into dance; photo by Maria Baranova

Full disclosure: I met Anne Bogart in 1993 when I auditioned for a production of The Women at the Hartford Stage Company at a moment in my journey when I may have thrown away all my talent and become a lawyer or something.  She did not cast me, but what happened in that meeting is one reason I will never stop being an actress.  I believe Bogart lives almost exclusively in that sweet spot of creative “flow,” where nothing is forced, all experience is glorious evidence of the gift of life and the muse just oozes out of her with incredible ease.  I don’t know this to be true at all . . . I just believe it because this was how she made me feel.  In Chess Match No. 5, a production conceived by Bogart and adapted from the words of John Cage by Jocelyn Clarke we are let into that world I have imagined – where the real artists live.

The characters, He and She (Will Bond and Ellen Lauren), are two who speak the words of Cage as though they are having a conversation over chess and coffee with toast.  The language is high in intellect.  The creative process is described as a series of observations of the natural world, which are imitated by the artist and then re-occur as art.  It gets dense and there is no real story, yet I was thoroughly entertained.  You know how it is when you totally relax and you are in an environment of no judgement and you have that “aha!” moment that just delights you and makes you giggle a little?  The whole show is like this.  Bond and Lauren even burst into dance in the middle of their philosophical talk and it is a total goofy pleasure, not to mention one of my favorite Bogart fingerprints.  The free and whimsical choreography is by Barney O’Hanlon.

This is a show that must be grasped with an open hand.  If you try to make too much of it, hold on to any one moment too long, or “figure it all out,” you won’t like it.  If you can let it just flow over you and just notice how some of the mind bending makes you feel, you will definitely enjoy yourself.  John Cage was a musician and composer who created from everything that was happening in the moment of the birth of his creations.  Even the intrusion of the sound of traffic outside his studio contributed to his work.  He talked a lot about intrusion and how the creative process is never uninterrupted.  Some artists would have a tantrum; Cage used the interruption and intrusions, found joy in them and invited others to come along to perhaps even find a bit of bliss.  The sound design in this show is a complex masterpiece by Darren L. West who has us believe that we are hearing the universe as Cage heard it.

I found it hard to separate Bond from Cage. For me, Bond became Cage from his first easy smile.  Bond looks like a gently aged Tom Cruise if Tom Cruise were . . . erm . . . normal, loving and without condescension.   Lauren seems to represent the sweetness of the world which Cage was constantly discovering.  She brings light and a little party to the game.  I also found her to be very sexy.  One gets the feeling that Cage attracted lots of sweet friends like this; or, perhaps, those who knew Cage became a little more sweet due to the effect that his acceptance had upon them.

By the end of the show, I had the tears in my eyes that come with relief; the kind of relief you feel when you drop a tea cup in your friend’s house and, rather than scolding you, your friend says, “what a beautiful sound that made as shattered on the floor; I’m so glad you are here.”

CHESS MATCH NO. 5; conceived and directed by Anne Bogart; text arranged by Jocelyn Clarke from the words of John Cage; Featuring Will Bond and Ellen Lauren; Created by SITI Company;

In the summer of 1978, while watching a performance of A Murder is Announced on the London stage, Margret fell in love with the theatre. Born and raised in Cedar Falls, Iowa, Margret came to New York City in 1994. She was cast in the company of Newmyn’s Nose Limitless Theatre Limited in the summer of 1995 and eventually became a member of the company’s board. Margret starred in the critically acclaimed and award winning short film Jigsaw Venus by Dean Capsalis in 2000 (Best Actress, Buenos Aires International Independent Film Festival) and her film career was begun. She played the adorable Fag Hag, Audrey, in both A Four Letter Word (2007) as well as Violet Tendencies (2010), films by Casper Andreas and Jesse Archer. Recently, she had a co-starring role in Max Emerson's new film, Hooked. Always sentimental about performing for a live audience, Margret penned and performed Orangerie, a one-woman show exploring the subject of finding love while traveling non-traditional avenues, which premiered at the Bowery Poetry Club in November of 2005 and ran through the spring of 2006 to critical acclaim. After Margret’s family survived the death of their son, Gavin, to SIDS in 2011, she penned her latest one woman show, Finding Gavin, which premiered in New York City in 2015. Margret has appeared in sketch comedy scenes as Nurse Margret in P. Diddy’s television series, Making the Band; she says Puffy is a marvelous partner in improvisational comedy. Margret has a BFA in Acting from Rockford College and also studied Acting at Regent’s College in London, Classical Voice and Opera at the Royal Academy of Music in London, and Acting at Sally Johnson Studio here in New York City. Margret is also a published poet. She lives in Yonkers, NY with her husband, Tattoo Artist Bobby Cimorelli, and daughter, Alyson. 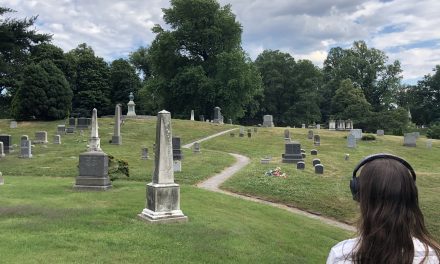 A Time To Kill

A Night with Janis Joplin