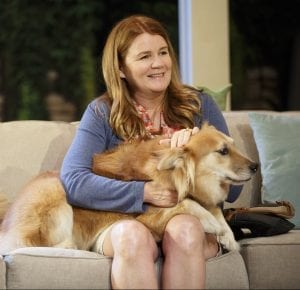 Ask any actor — ennui is hard to play for even a short scene.  But for the better part of three hours?  Yikes!

Which takes us to Rancho Viejo, a suburban could-be-California outpost where all the homes are lavish and indistinguishable; the pools are over chlorinated, and the lawns tended by others.

The residents move through the barbecues and book swaps with an uneasy lassitude.  There is plenty of money but little enthusiasm for whatever enterprise earned it.   It is a couples world.  “I’m Pete —  of Pete and Mary” is a normal introduction at any of the local events.   Everyone is heterosexual and nearly all white.  There is one African-American character, though he’s quite fair, and there is one Latina who, as she speaks almost entirely in Spanish, is more homage than character.

It is not quite a retirement community — not God’s waiting room so much as a storage space for unrealized lives.  The evening comes down to a passive-aggressive struggle for meaning.

The play opens with Pete, a sixty-something, white-bread looking man asking his sweet faced wife of indeterminate decades, Mary, if she is happy.  She equivocates.  And, there you have it.  The pursuit of that query — Mary’s relative happiness and that of all the others — is the point.  What we learn is not so much disturbing, as disappointing.

There is much made of art — but only in the abstract, in conversation.  Is a person art?  Can art be life changing?  Why won’t anyone go to the art show?  If that is an effort to have the audience conclude that the play is art, it is artless.

The cast is so solid.  You may not warm to the characters, but the actors are true north on delivering them.  Pete  (Mark Blum) and Mary (Mare Winningham) are new to the community.  Pete dives in, sometimes playing the naif, sometimes the obsessive.  He is always vaguely annoying in the way someone you know well can be.  He prompts a sense of “Oh, no, there he goes again.”   Mary is the hopeful lady of the play.  She strives for friendship, for art, for meaning; whenever truth is to be told, it is she who tells it.  To the extent anyone here is a risk-taker, it is she; that said, let’s roll back expectations.  This play is not a cliff hanger.

Julia Duffy plays Patti, of Patti and Gary.  Duffy’s Patti is delightfully self-involved.  Duffy does more with a glance and a pause that many performers manage with a soliloquy.  Patti partners with Gary (Mark Zeisler) who is writing a book.  Zeisler plays him with surfer brio, offering comic relief throughout.    Leon (Tyrone Mitchell Henderson) and Suzanne (Lusia Strus) are partners and newer together than the married couples.  Each spends a lot of energy watching the action and reacting.  Leon is African-American, which the script references once as a throw away line.  Henderson plays Leon as observer, so we look to him to react.  Strus’s Suzanne is more acid than the rest.  Oddly, she has her moment of revelation face down in a massage chair — a risky choice for the writer or director.  Ethan Dubin plays Tate a too young member of the ensemble.   He is not so much a character as a symbol of chaos as Ruth Aguilar’s Anita is more representative than narrative.  Bill Buell’s Mike, wanders comfortably in and out, consuming the action around him as he eats and eats.

There are nifty, and telling, small pieces of business.  For example, Pete flosses his teeth as he walks around the living room intermittently speaking to Mary who is trying to read.  It made my skin crawl — a pointed example of how the annoying personal habits of a partner really get to you once you have moved well passed passion and into forbearance.

For all the struggle for meaning, the play’s resolution is a downer. Suzanne discovers her limited capacity to receive love; Pete’s been faking any understanding of art.   Mary, who flirts with exception, succumbs to convention. There is little passion and a good deal of resignation.

The production at the main stage of Playwrights Horizon makes a big demand.  Running time is three hours with two intermissions. Two-act plays so often have “second act problems.”   Apparently three-act plays just delay them.  The first two acts here seem interminable but, but —  stay with me here — perhaps they were intended  to underscore the tedium of life at Rancho Viejo.  In that, they succeeded.

The Lifespan Of A Fact 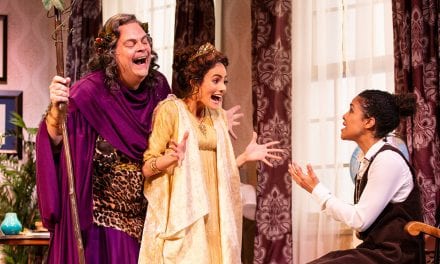 The Gods of Comedy