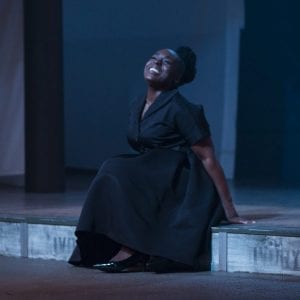 Maechi Aharanwa as Retha in “Sweet” at NBT. Photo by Peter Cooper.

In the opening scene of the National Black Theater’s world premiere production of Harrison David Rivers’ compelling new play “Sweet,” Retha Baker (Maechi Aharanwa) is hanging endless lines of laundry in the back yard of the family home in Junervy, Kansas.  It’s a hot and hazy June day in 1968 and she is formally dressed in a black shirtwaist dress and little pumps.  Humming along to an old radio, she thinks she hears a noise and turns it off.  “Mama? Mama, is that you?” But it can’t be and she knows it.  To comfort herself, she starts talking to her anyway and flops down on the ground. Talking in a baby voice, although she’s a grown woman of 20 and now the head of the little family of her younger sister Nina (Renika Williams) and herself, she tells her mother about her dream last night.  She dreamt of snow.  Big fat, cold, wet flakes that you can catch on your tongue.  And she remembers that her mother always said that dreaming of snow was a “sign.”

In a breathtaking performance, Maechi Aharanwa gives Retha such radiant life, it is difficult to tear your eyes away from her.  Every word she speaks rings with the clarion call of truth.  Every gesture and move she makes comes from her heart and core.  Aharanwa’s performance alone is worth the trip uptown, but it’s not all you get for the price of admission. Harrison David Rivers the playwright and Raelle Myrick-Hodges, the director, present a pitch perfect world that is truthful, real, and obviously offered to us with thoughtfulness and love as a gift.  The audience is riveted, we can’t wait for the story to unfold.

When the play opens, Retha and Nina’s mother has died suddenly and unexpectedly.  Fatherless, they have had an extremely close bond all their lives although, as sisters do, they bicker constantly.  Now, without their mother there to provide a stabilizing moral compass, they are both scared and uncertain. Retha, 20 years old, is the steadier sister.  She has always been the obedient daughter, obeying her mother’s dictums to the letter, even when they ran counter to her heart’s desires.  Following her mother’s untimely demise, she is struggling to step into the shoes she fears will swallow her whole, but feels duty bound to wear.

Nina Baker, 17 years old, is cut from entirely different cloth, and no wonder.  Being the little sister of a goody-two-shoes older sister, is a bitter pill to swallow. From an early age, she tests her place in the world by seeing what she can get.  Nina is no soft, coquettish, fragile flirt.  She’s a demanding, take-no-prisoners, dynamo who knows exactly what weapons she has in her arsenal and how to deploy them. But with her mother gone, her single-minded focus on her own needs and wants are fueled by a growing, irrational fear of spinning into the universe unanchored and alone. Renika Williams manages to make Nina strong and selfish, but sympathetic. Not a caricature or a villain,  Nina is a true daughter of her powerful mother, but also a victim of her own youth and fears. It’s an impressive acting job.

Rivers has created a completely realistic relationship between two sisters who love each other and share unbreakable bonds, while inflicting careless wounds. One minute they’re tearing each other’s hair out, the next minute they’re playing ring-around-a-rosy.  I have a couple of bald patches myself, so I know how accurate a portrait he’s painted.  Frankly, I wouldn’t have thought it possible for a man to write a relationship between two sisters so accurately before seeing “Sweet.”

The action of the play revolves around neighbor George (Tre Davis). Home from four years away in New York City at college, George returns in time for the funeral, and for the sisters’ relationship to start unravelling.  The object of a secret crush by both sisters from childhood, George has had a childhood yearning himself.  He’s the only one of the three who has had a taste of the larger world and it has lit a fire in him.  Tre Davis too, gives a wonderfully natural, easy performance that has the audience completely understanding why two sisters would fight over him.  Well, that and the 6-pack.

The three of them are poised on the brink of adulthood, caring deeply about each other, and understanding that they have choices to make that will affect the rest of their lives.  And all three understand that their lives in Junervy keep them isolated from the larger concerns of the world.  All three understand that their choices could bring them into, or keep them out of that larger world and the issues of the day.  And they must all weigh those longings against their personal visions of happiness and fulfillment.  Hard choices.  Harder still to make in the throes of deep emotions. Strangely, the only false note in the play for me was a choice of George’s.  Listening to the talk-back afterwaards, I found out it was a decision made in anger.  Oh, a “man thing.”  No wonder I didn’t get it. 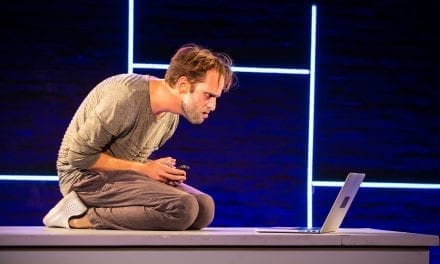 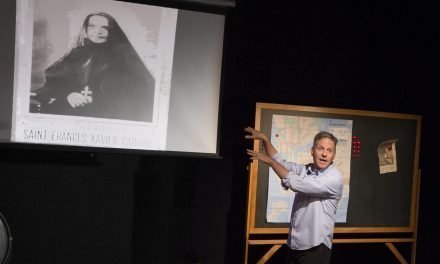