ONE FLEA SPARE -- Playhouse Creatures Theatre COmpany presents the 20th annniversary production of "One Flea Spare" by Naomi Wallace October 14 to November 13, 2016, directed by Caitlin Wallace. Joseph W. Rodriguez, as Bunce, ministers to Concetta Tomei, as Mrs. Snelgrave, who has come down with the plague. Photo by Monica Simoes. 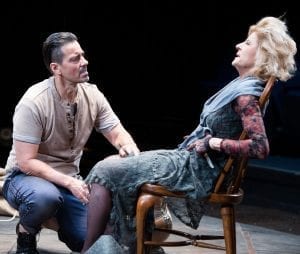 I make a deal with my theater guests who are willing to head way, way east to the dark reaches of Bleecker and Bowery, or way, way west to the overheated theater lofts of the West 50s to see plays no one’s heard of but may prove to be this year’s rough diamonds.  The deal is, if it is truly awful, the guest can leave at intermission.  So it was that I was sitting alone for the second act of One Flea Spare one night this week.

It is a two-act set in the time of London’s Great Plague (1665-1666), the historic epidemic  that killed nearly a quarter of the city’s population in just 18 months.  The plague was caused by a bacterium usually transmitted through the bite of an infected rat flea, hence the play’s title.  It was, of course, a time of fear and ignorance, with an abundance of rats and a scarcity of hygiene.

As you enter the theater at the impressive Sheen Center near Bowery, what appears to be the corpse of a small woman lays curled in the center of the square stage.  The wooden floor is bare but for her.  This inside world is a rich man’s house locked from the outside by the London Guard, an effort to contain the pestilence gripping the city. The stage is ringed by a dirt patch that serves as the outside world from which limited exchanges serve as updates and relieve some of the monotony of the action within. Brice Cutler’s scenic design sparkles in it’s “less-is-more” efficiency.

In the story, there is a nod to Poe’s Masque of the Red Death as playwright Naomi Wallace uses the ghastly details of the murderous plague as well as the lack of defense, the shortness of time, and the closeness of quarters to underscore her themes.  The five characters — the lord and lady of the grand house, a young servant girl, a runaway sailor, and a city guard — bond and betray as they deliver the timeless themes of death’s inevitability, of love debased, of the nobility of the low born and the crassness of some born to power.

Remy Zaken plays Morse, the twelve-year-old girl who’s run from a neighboring nobleman’s house and begs sanctuary.  Morse is the lone survivor of that house where she has seen everyone she knows, master or wretch, die.  Zaken maintains a remarkable, if manic, charm throughout.  She is the flashpoint for much of the action and we rely on her Puckish energy to keep things moving.

Gordon Joseph Weiss (William Snelgrave) and Concetta Tomei (Darcy Snelgrave) are durable, character actors you may well recognize.  Regrettably Mr. Weiss is there to play the villain, and while his character’s unsavory interest in the young sailor’s sex life is played to skin-crawling advantage, there is a modicum of scenery-chewing at play as well.  Among these five American actors, Weiss seems to struggle most with the indeterminate Brit accent he’s striving for.

Ms. Tomei has more to do if less to say.  While rigid in posture, and gloved and garbed restrictively, she loves the girl, and yearns for the sailor.  She has been profoundly hurt and is nearly resigned to her plight. Wallace has made Darcy the vessel of the play’s ironic punch.  It is Darcy’s several redemptive moments that hold the audience — redemption in the face of plague.

Where Lord Snelgrave’s prurient interests are prosaic, the reanimation of Lady Snelgrave’s sensuality is bracing.  I don’t remember ever having seen a lovely woman of a certain age groped with purpose on a New York stage.  It was fascinating.

Donte Bonner playing Kabe, is the guard trading tangerines for favors, and keeping the audience aware of the awfulness without, lest we get too engaged in the awfulness within. His beautiful body and resonant voice are almost comic relief to the bleak realities around him and us.

Joseph W. Rodrigues, playing the reluctant sailor, Bunce, knows what he’s about.  Rodriguez is Everyman but in a tough spot.  He’s a knockabout with no social standing and no future. There’s plague out there, a mad nobleman in here and a broken woman he can probably help.  He brings some heat but is most interesting in his restraint.

All that said and meant, this was a tedious evening in the dark.  It’s not so much that anything’s wrong as that it’s preternaturally grim.  When the lights came down and up at the end of the first act my thought was: “Thank you, Jesus!  It’s over.”  But it wasn’t.  And once you start down that road, it is hard to get re-engaged with the plague.

I have noticed that even plays punishing in their tedium often have a compensatory moment or two.  One for this reporter came at the play’s denouement.  Lady Snelgrave is “showing tokens”; that is, the plague marks propagate her thighs.  She is prepared to die and asks for a little help while wielding, what for all the world looks like a butter knife.  At a moment meant for piercing dramatic impact, she staggers to a seat, pulls her lover (the sailor, Bunce) to her bosom, and cries: “Do you love me?”   Bunce responds with, what I am sure was an unintentional — and so all the more hilarious —  Pythonesque pause that had me on the floor — before he says: “Not enough to kill you.”

At this point, I am shoving my fist in my mouth trying to control myself, as I am aware that this is a “friends and family” audience.  Ask me about this play in a year and this will be the memorable moment.  “Not enough to kill you.”

After enthusiastic applause and hooting from the people around me at the end of the performance, one more compensatory, I-AM-glad-I-came-tonight moment bubbled up from a giddy young man seated behind me.  As we all stood gathering our programs, coats, and umbrellas, he reached across me to the man sitting nearby to urgently inquire: “Do you remember me?  You were our fight captain on Peter Pan!”

And this, my friends, is proof positive that almost any night in a New York theater, will have it’s redemptive moments.

One Flea Spare – By Naomi Wallace; directed by Caitlin McLeod

Ready For The River

Date Of A Lifetime 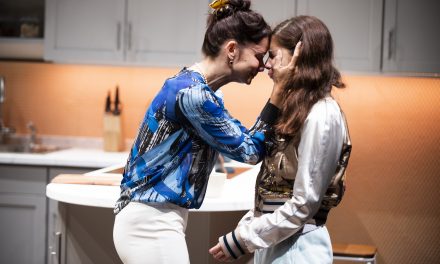