An alternate universe inhabited by humans and robots is a common sci-fi setting and “Are We Human” at The New Ohio Theater uses it in a similar way as most popular sci-fi. 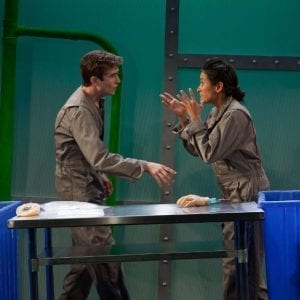 Matthew Bretschneider, Alexandra Lemus in “Are We Human.” Photo by Benjamin Heller

In this off kilter comedy, a part of the Ice Factory Festival, humans have cruelly subjugated android robots for their labor and therefore, undermined the value of human emotion. Androids slave away making products and serving humans who have absolute control over them. In order to keep the wheels of the cruel system turning, humans must repress emotions like love and ignore a sense of justice.

The humans who have bought into the system are blissfully ignorant. Those who dare question the establishment are punished. A revolution seems to be the only way to stop the greedy, heartless machine.

In walks an unlikely Messiah figure, Ethan (Matthew Bretschneider), and his empowering co-worker Violet (nicely played by Alexandra Lemus). Vi and Ethan miserably drudge in the basement of a drone factory where they itemize drone body parts for human sale. Vi gets word of the Revolution from the voice of God and realizes that Ethan is the chosen one to start it. They go on a voyage to spread word and start the uprising.

Metaphors that touch on the current problems of mega-capitalism and consumerism are the most explicit, but I also found the commentary on the relationship between oppressor and oppressed particularly relevant. Humans who are dependent on androids in every aspect of life fail to see them as deserving of equal rights. They are regularly subjected to cruelty, both physical and psychological.

The play was supposedly inspired by the work of James Baldwin, so I naturally looked for clear commentary on racial injustice and disparity, but it never came. And without one African American performer in the play, I got the feeling that Baldwin himself would have left raising an eyebrow.

Don’t get me wrong. The play is duly entertaining and well performed, but not addressing racial inequality in a play ostensibly inspired by the work of James Baldwin is a serious oversight. If a play takes on capitalism and consumerism as issues that are threatening the nation’s humanity, why not also deal with the racism and cruelty that have been with the nation since the founding? Of course, I don’t mean to say that all plays that seek to address global issues should also include race, but a play “inspired by the work of James Baldwin” in the age of Eric Garner, Mike Brown, Tamir Rice, Sandra Bland, et al… is certainly remiss if it doesn’t. Even though the theme of unfair labor was among its largest, the play invisibilized the people whom have been most victimized by it—particularly the people whom its inspirer, Baldwin, spent his life uplifting.

Considering this omission, even a character’s humorously pondering existential issues with the question of the title, “Are we human?,” seemed uncomfortably ironic.

Thankfully, the cast is strong and the direction by Margaret Perry was clean and precise. The minimalist set design by David Arsenault, set scene-by-scene with rolling furniture, created a sense of adventure. Props were expertly executed by Jon Levin and played a pivotal role in creating the world of the play. The comedic prowess of the performers, especially Bradford Cover (Mr. Algorithm), made the experience fun and lighthearted.

Just consider yourself warned. If you think a play inspired by the work of James Baldwin necessarily involves some commentary on race issues in America, think again. But this charged futuristic voyage in a dark sci-fi comedy is definitely entertaining and, should you see it, you certainly won’t regret it.

ARE WE HUMAN by John Kaplan. Directed by Margarett Perry