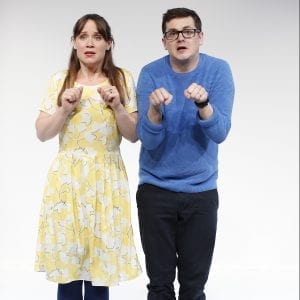 Attend the tale of Ollie and Jill,
Like Sweeney and Lovett they live to kill.
They made a bargain just like Faust,
But at least they kept a beautiful house.

It’s not only the macabre title and British pedigree of Philip Ridley’s Radiant Vermin that had me leaving the theater singing tunes about the Demon Barber of Fleet Street. It’s also that, like Sweeney Todd and Mrs. Lovett, Ollie (Sean Michael Verey) and Jill (Scarlett Alice Johnson) are an English couple who come to realize the joys and perks of serial homicide. But, where Sweeney is a bloody revenge fantasy triggered by a family torn apart, Vermin is a cheeky and sanitized allegory taking aim at young parents who will do anything in the name of their new baby, especially if it involves feeding their own materialistic desires.

The time-tested plot device of making a deal with the devil spurs our poorly financed yet loving couple into action when, one day, Miss Dee (Debra Baker) arrives at their rundown flat. (They are pleased to meet her, but do not guess her name.) She offers them a new home on a questionable block, and asks, in return, only that they do a little renovating to make the neighborhood more desirable. With a baby on the way, it’s an offer they can’t refuse and, soon enough, they are moved in and dreaming of turning their new place into a magazine-ready paradise. But, there’s Hell to pay. One dark night, a homeless man wanders in and Ollie accidentally kills the poor soul. 66.6 seconds later, the corpse has vanished and a beautiful new kitchen has majestically appeared. Tossing their morals aside in favor of renovation nirvana and a Lamborghini in the garage, Ollie’s involuntary manslaughter blossoms into an efficient His & Her kill room process, ridding the neighborhood of vagrants while driving property values heaven-ward. Wealthy neighbors soon are everywhere, proving to the couple that, as Sartre wrote, Hell is other people.

Rather than witnessing all of the gore, director David Mercatali serves up the story in cartoon form, for easy digestion. The actors are dressed in cheery pastels and occupy a set consisting only of bright white walls. Verey and Johnson convey the tale directly to the audience with ample amounts of physical comedy and high speed patter. In an extended party scene toward the play’s end, the two portray everyone in the neighborhood in a back-and-forth that is almost as exhausting for the audience as it must be for the actors. More a story telling machine than fleshed out characters, Verey and Johnson run the risk of becoming unsympathetic, or worse, uninteresting. Fortunately, Ridley gives each role one dollop of depth, just enough to be likable. For Jill, it’s wrestling with her religious upbringing and Johnson shades the inner conflict perfectly. For Ollie, it’s his drive to be the breadwinner, no matter how misdirected his path. Verey’s comic sensibilities jive well with the play’s mantra than “enough is never enough.”

In a smart piece of double casting, the once devilish Ms. Baker shows up as one of the unlucky homeless about to meet her maker. During a brief but wonderfully complex scene, she is the only tender and real character we are to meet. As Ollie leads her off to her destiny, the point is not lost on the audience that dehumanizing the less fortunate is a sin practiced by those on both sides of the proscenium. 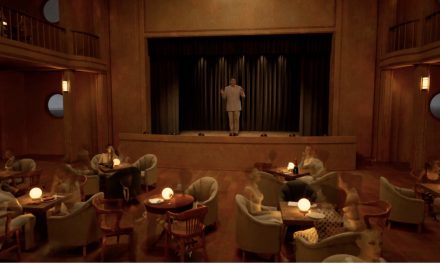 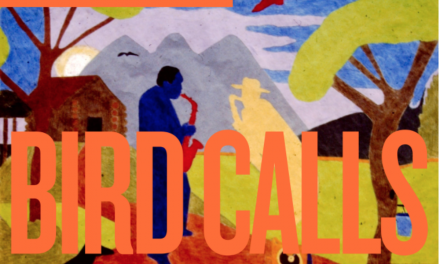 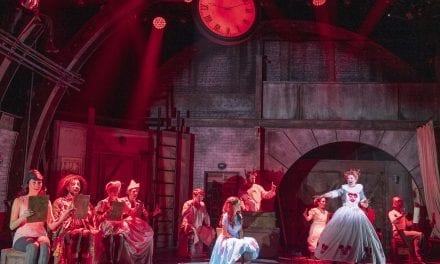