Harry and The Thief 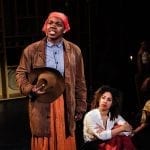 These are the words spoken by Mimi (Shelley Fort), a young woman from the 21st century, to Harriet Tubman (Ngozi Anywanwu) in Sigrid Gilmer’s action comedy “Harry and The Thief,” presented by The Habitat at The Robert Moss Theater.

Ngozi Anyanwu plays Harriet Tubman with swag. She commands the stage with the gravitas that one would expect of Tubman herself. And commanding any scene in this fast paced comedy performed by a dexterous and talented ensemble is no small feat. 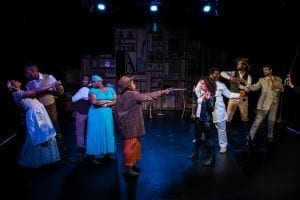 I was apprehensive when I read the show’s description. The recent ruling to put Tubman on the $20 bill surprisingly made me a bit possessive of her image. What many people thought would be a moment of pride actually struck me as theft, as a cheapening of her.

As an African American who lives with a certain conscientiousness about the stories of my ancestors and the way the narrative of history is told, I was unsure if this play could be trusted.

What were they going to do to Harriet Tubman? Sure, it wouldn’t be factual but would the re-telling be worthy of her?

Jeremy (Larry Owens), a mad scientist figure convinces his cousin Mimi, to time go back in time to give Harriet Tubman modern day weapons in order to start a black empire. Mimi meets Tubman—familiarly called Harry—leading a group of newly escaped slaves to freedom. The group is full of personality, most notably Vivian (Tesiana Elie), who has left behind her baby that is the product of a rape.

The ensemble seamlessly maneuvers choreographed montages that throw the audience into the whirlwind of the story. The synced movement, the humor, and the top-notch performances make the show irresistibly entertaining, but what makes it truly special is the skillful integration of contemporary race issues into the action.

For instance, white people who are unable to talk about race without making it “about them” (also known as white guilt) are taken to the mat with bravado. In a time when there are white people who ask tour guides on plantation tours whether a slave master was “friendly or not”, we are given front row seats to the reality of presumed white innocence in the character of Jones (Braugh Hansen). Jones has raped his slave, Vivian, and feels entitled to her romantic interest because he “cares about her.” And in an unforgettable laugh out loud moment, Gilmer touches of the n_ word problem and the complexities of interracial dating all in one breath.

Though Gilman skillfully uses archetypes, no character is merely a stereotype. Through humor—and it is funny, to be sure—each character rises to the level of humanity. Tubman, who may be seen as a stoic, detached leader, reveals her fear of dying alone in a touching moment of vulnerability. The “tragic mulatto” is a happy-go-lucky type with a sadistic streak. The mad scientist finds love in an unexpected place. The relationship between Jones and Vivian has compelling layers of complexity.

An action comedy that uses history to discuss contemporary race issues may sound far fetched, but in the end, I was grateful to find “Harry and The Thief” more than worthy of the re-imagining. It is a rare comedy that successfully endows my enslaved ancestors with the humanity they deserve. They were more than just downtrodden figures with their eyes to the sky singing Negro spirituals. They should be honored with stories that put them at the center of the narrative in fresh new ways.

Comedy has a way of elevating human nature by magnifying and debasing it. To be sure, there’s a whole lot of ugly in American history that doesn’t get the magnifying glass treatment often enough. It’s time to hold up the glass and take a look. Plays like “Harry and The Thief” go a long way to help. This is not to be missed.

HARRY AND THE THIEF by Sigrid Gilman. Directed by Kate Lindsay.