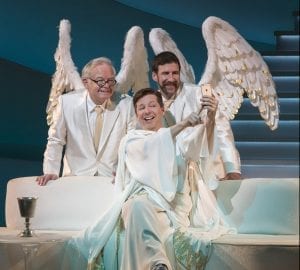 Sean Hayes walks onto the stage at the Booth Theater — acknowledging the applause of countless fans of his Jack McFadden character on television’s Will and Grace.    He is gracious and winning and more than willing to accept roses for that role.  That said, he is immediately funny in this role. No longer the sidekick, he’s Almighty God in a Romanesque toga and running shoes.

He’s flanked by archangels – Gabriel (James Gleason who looks a lot like Warren Buffett here) and Michael (David Josefsberg), who manages the ‘schtick’; for example he touts  An Act of God tee shirts, cups, and keychains.  God calls him a “merch-angel”.  They are cleverly used  second, if winged, bananas, but ultimately this is a one-man show.

Hayes carries the whole 90 minutes lightly on his narrow shoulders, glibly rewriting the commandments and pointing out all the absurd mistakes humanity’s made interpreting the old ones.  God’s deigned to visit us to straighten out a few things we, humanity, have screwed up.  It was two puppies God told Noah to bring on to the Ark.  Two of every living thing? Crazy!  And Job, long suffering Job of the  boils and ashes?  God was just joking with the Devil – not testing Job’s piety.  God thought it a “hoot” not a teaching moment.

What’s more, God wants us to “cut it out”: to stop using his name to bless sneezers, win ballgames, and punctuate our orgasms.  He is a brand, he insists, a valuable brand and all the right wing politicians  and anti-everything moralists invoking his name, assuming his endorsement, and generally presuming an intimacy with the deity are out of line!

Joe Mantello directs perhaps for comic (or cosmic) relief, as he has both The Humans and Blackbird up as well.  Granted this is a much simpler show but direction is flawless.

Playwright David Javerbaum’s impressive CV makes you wonder what you’ve been doing with your life.  At forty-four, he’s been head writer on the Daily Show, he’s a Tony nominated lyricist for Cry Baby, wrote Grammy-winning songs for Stephen Colbert’s show, wrote Neil Patrick Harris’ opening number for the 2011 Tony.  Hasting Pudding at Harvard, a Jeopardy Teen winner, has a Thurber prize,11 Emmys and 2 Peabodys —  I could go on.

Not surprising then that An Act of God is only sort of a play; it’s more stand-up comedy leashed to a talk-show couch. That God is a short Jewish gay man with vast perspective comes as a surprise, not an unwelcome surprise, but an amusing turn of events.  Seeing God gifted with Hayes’ comedic timing is kinda neat.

Last year, Jim Parsons (Big Bang Theory), delivered the omniscience in his more reserved style to wonderful reviews.  Makes you wonder who else could play this part.

Because the format is more tv talk show than traditional Broadway comedy, writers can lever in timely material.  When Parsons “God” explains how Adam and Steve became Adam and Eve a timely Bruce Jenner joke buttoned up the thought.   This time around Hayes assures Steve who is about to have the surgery to become Eve, that one payoff is she can use any restroom she wants.

We, the audience, had a wonderful time.  There is a whiff of sacrilege for the devout, perhaps, and a break neck pace that gins up the energy in the room.

Does your skin crawl when the audience, in a Broadway house, applauds a “special effect?”  This show opens with a black curtain sucked into a cosmic somewhere — there is Biblical thunder-bolting and lots and lots of noise.  It was fine.  It did not rise to the level of remarkable.   This tells you about the audience for this property but not about the property.

Theater critics and luminaries have been whining for a decade about how dreadful it is that it takes a film star, or worse, a television personality, to fill a Broadway theater.  We are going to have to get over that because Jack, that is, Sean is the real deal on this Broadway stage (as he was collecting a Tony in 2010 for Promises,Promises.)  Fans of Will and Grace may boost the box office here but the Booth rocks with laughter for a divine Hayes.  Turns out, God and Jack?  Lots in common!

An Act of God – By David Javerbaum; directed by Joe Mantello 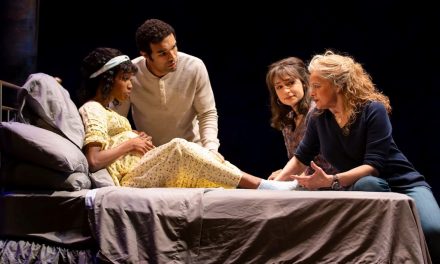 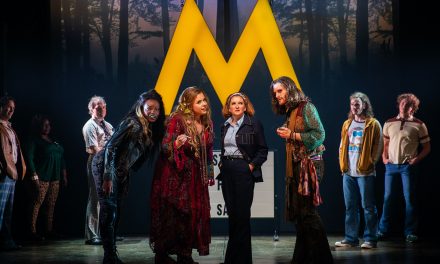