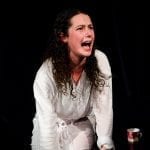 “I just don’t like people thinking we come as a package, like we’re the same person,” says Rachel to Ross in the opening seconds of James Fritz’s split personality of a play, and the meta-joke is immediately apparent. Ross and Rachel, you see, are both portrayed by the same actor (Molly Vevers), and just where one spouse starts and another ends is at the center of this clever, if overly complex, hour. Well, it’s at the left-of-center actually. Taking up the rest of the space is a dark, farcical version of a particular television sitcom. I suppose we have Netflix to thank for the fact that Friends, that 1990’s touchstone, has provided the inspiration for this young British playwright. And while an encyclopedic knowledge of what Rachel Green and Ross Geller were up to back in the day is not requisite for enjoying the work, it would certainly help you appreciate many of the passing references.

We find our single-bodied couple now long married and in their 40’s. Gone are the on-again off-again years of flirtation. These days, resentment and boredom are in the mix. Then, a serious medical problem strikes Ross and the couple can only long for the crazy antics of their youth. “I’ll be there for you,” said the Friends theme song. Well, we’ll see. While in the hospital, Ross pines for network TV moments, “I want to look in the bed next to me and it’s my high-school football coach who yells my last name and says get down and give me twenty.” What he ultimately finds is something much more likely to turn up on an HBO drama.

That one can imagine Ross in his hospital bed, or Rachel at her office, flirting with a co-worker, speaks to the strength of Ms. Vevers’ performance. Dressed simply in a white bathrobe, with no attempt at the infamous Jennifer Aniston hairstyle, and with no set pieces other than a shallow, black, reflecting pool, she effectively transports us. Sometimes her character separation is perfectly clear, other times it is intentionally blurry as if, indeed, the two are one. And sometimes Fritz just blows up the action by turning the play into a sound poem, most notably when Rachel cannot stop asking everyone if they would like some coffee. Her repeated “Coffee? Coffee? Coffee?” soon comes to sound like the beeping of a hospital heart monitor, a smart gambit that goes on too long.

That pool, by designer Alison Neighbour, gets a workout from Ms. Vevers, splashing, drinking, and bathing while director Thomas Martin draws every metaphorical note he can out of the drink: drowning, cleansing, rebirth, baptism, you name it. Plus, the pool, when still, provides a reflective second-self on stage, as does Douglas Green’s lighting when he casts a full shadow of Vevers upon a wall.

Friends aficionados will appreciate references to Ross’ dinosaur tie and Rachel’s prom queen background, but only a couple of times do such allusions fully resonate. The fact that nearly every episode title of Friends begins, “The One With…” makes perfect fodder for this study of duality, and Fritz finds the perfect place to insert those words toward the play’s climax. But my favorite surprisingly complex moment comes when Rachel says to an unidentified visitor, “How are the twins?” It’s at once a shout-out to the final episode of the series, and a reminder that, for the conjoined couple we are watching on stage, no one told them life was gonna be this way.

Ain’t Too Proud – The Life and Times of The Temptations