I had enthusiastic anticipations for this show, presented by Always Love Lucy Theatre —the advance press on it said it had been rewritten to spotlight issues pertaining to transgender people.

The advance press also noted that this had been accomplished “with almost no changes to the original script”.

Indeed, this version of Pygmalion was pretty close to what you would get if you simply did a cut and paste job on Shaw’s classic text, substituting pronouns and shoehorning in a couple lines to explain that Eliza wanted to become a gentleman in order to be accorded full dignity and respect and not be beneath Higgins, as she perceived his housekeeper to be.

My overall reaction was disappointment: it doesn’t work. The original dialogs between Eliza Dolittle and Henry Higgins sheds no meaningful light on gender issues, nor, without far more substantial additional elaborations and modifications, do they provide any kind of situational platform for producer Saima Huq, director Anthony Pound, or the cast to do so. And, reciprocally, modifying Eliza Dolittle’s transformative journey so that she is becoming a gentleman rather than becoming a lady fails to show us many new aspects of Shaw’s play, either.

Pygmalion in its classic form is about class and the question of presentation— to what extent is our identity merely a matter of how we present ourselves? That’s practically a hand-calligraphied invitation to explore that same question as it applies to gender identity, but the personnel who crafted this variant did not RSVP to that invitation; they didn’t go there. A playwright considering such issues might choose to assert the absence of any real differences between gendered experiences aside from projected expectations, or might choose to use the play to outline the differences in gendered behavior during the timeframe depicted, but opted to do neither.

The original Pygmalion is also at its core a tale of developing sexual tension: a lady is an appropriate object of interest for a gentleman of Professor Higgins’ class, and the immediate consequence of transforming Eliza Dolittle into a lady is that he finds himself attracted to her, possessive of her, in ways he had not anticipated. The modified Pygmalion had the opportunity here, once again, to play with sexual orientation as well as gender, but in failing to tease out some interesting new tensions or observations it instead left us with a dissonant confusing patch of dialog and interaction in which Higgins is neither fascinated with the man that Eliza has become nor with the woman who underlies the performance as man, and instead utters the original unmodified Shaw lines in a context where they illuminate no new truths and make no sense.

Several things are extremely noisy by their absence: Eliza Dolittle at no point expresses any desire to be a man aside from the socioeconomic gains she’d get by going above and beyond becoming a lady to become a gentleman instead. Higgins teaches Dolittle how to modify her speech but at no point is she given any instruction in the gendered attributes of gentlemanly behavior. Placed in a social setting to try her wings and test her progress, she is criticized for her choices of topics but not spoken to about appropriate conversation for a male in mixed company.

Christopher Romero Wilson does Henry Higgins as a clueless social maladroit with a genius for phonics. If Wilson tends to sing Higgins all on a single note, it is fair to point out that Shaw wrote him that way.

Pickering is performed with warmth and quiet dignity by David Burfoot. He exudes kindness via small gestures and tone of voice that helps anchor an otherwise frictitious bunch of characters.

Eliza Dolittle, aka Elijah Dolittle, is rendered for us by producer Saima Huq, whose convincing versatility in speech diction and rhythm as well as her adept gender fluidity onstage were unable to quite compensate for the problems inherent in the dialog.

Eliza’s dad Alfred Dolittle is a character written to steal the show out from under the other performers if the actor is so inclined, and without stepping far beyond an understated confident portrayal, Tony White obliges in this regard.

Henry’s long-suffering mom Mrs Higgins is acted by Bette Shifman, who pivots from exasperation with Henry to a friendlier interaction with Pickering.

Also in small roles in the play were Vincent Bivona multicast as Neppomuck and Bystander and Kristi Cini doing Mrs Pearce, the Parlormaid, and the Hostess. 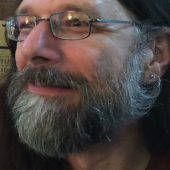 A prolific writer and eclectic social activist, Allan Hunter has created a rich collection of feminist theory papers: "Same Door, Different Closet: A Heterosexual Sissy's Coming-Out Party" was published in the journal FEMINISM and PSYCHOLOGY 2. His current work-in-progress is a memoir, FROM A DIFFERENTLY GENDERED CLOSET: THE STORY OF Q, a genderqueer coming-of-age and coming-out story. He is in the process of seeking a publisher.

Run For Your Wife