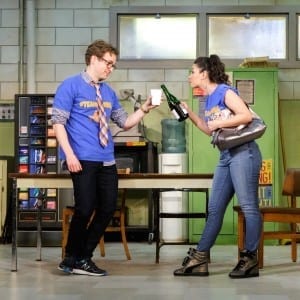 Your strategy with the new play from Primary Stages “Exit Strategy” at The Cherry Lane Theatre should be, get a ticket as quickly as possible and go.  Don’t miss this one.  It hits on every level a theater lover, novice, or even someone who doesn’t really like the theater (?!?), could want.  Drama, got it.  Comedy, check.  Realism, idealism, struggle, conflict, triumph, and even romance.

Ike Holter, the playwright has written a remarkable work set in Chicago where it was first staged, about the closing of an inner city high school.  This is a subject that resonates in every urban center in our country, and the characters in the play, teachers, administrators and students, represent a broad cross-section of society.  In the opening scene Ricky (Ryan Spahn) the meek school administrator is having his last one-on-one meeting of the school year with the staff’s most cantankerous teacher Pam (Deirdre Madigan), who has taught English there for 22 years.  Ricky is scared, Pam is angry, they both know they are there for Ricky to tell her that the school will be closing after the next school year and that Pam is not going to make it easy on Ricky.  It’s a brilliant scene that reveals Mr. Holter’s unique voice and use of language.  It also gives Ryan Spahn and Deirdre Madigan incredible scope to explore the range of their characters, which they do with flair and compassion.  It’s funny, it’s sad, and we feel for both of them.  It sets up the fundamental genius of Mr. Holter’s play – his ability to handle the subject matter with compassion and understanding for all the sides and players in a manner that is authentic and sympathetic.  There are no demons here.

As the play unfolds, we are introduced to several more teachers and a student.  Although there are some archetypes; Sadie (Aimé Donna Kelly) the radical African-American teacher, Jania (Christina Nieves) the spunky Latina teacher, Arnold (Michael Cullen) the disaffected old white teacher, Luce (Rey Lucas) the hip young male teacher, and Donnie (Brandon J. Pierce) the brilliant but alienated and angry student, there are no stereotypes.  This is in no small part due to the incredible acting talent of the ensemble.  Each of whom give an emotional, real performance and each of whom also know how to deliver a laugh.  To fight the closing or not? Is it possible to win?  Does it matter if they win or not?  Who loses the most in this battle?  The teachers?  The students?  The person who fights and loses?  Or the person who doesn’t fight and sits on the sidelines?  These are real people, real questions, and real debates going on every day around the country.  Which is what makes this play and this production so compelling.  Life isn’t unremittingly grim or funny.  People aren’t good or evil, likeable or repugnant.

I was forcibly reminded of the experience of seeing Tracy Letts’ “August Osage County” during the play.  How could I be laughing at a situation where people were hurting so badly?  How could the playwright have pulled this off?  I figured it out by seeing Primary Stages’ production of “The Exit Strategy” which rightfully earned Ike Holter “Chicagoan of the Year” award.  It was a group effort.

Ike Holter has managed to write a play that reflects real life in a heightened way that allows the audience to put aside their usual knee-jerk reactions and look at unsavory characters in a new light.  The cast has brought it to life faithfully and lovingly.  The director (Kip Fagan) has done a memorable job of moving the pace along at a rapid clip without losing anyone’s point of view, or any of the questions that the play raises.  He is more than ably assisted by the technical crew; set designer (Andrew Boyce), lighting designer (Thom Weaver) and sound designer (Daniel Perelstein), whose environments – complete with flickering and sizzling fluorescent lights -almost made me smell the chalk, old cabbage, disinfectant, and burnt coffee smell of my public high school. 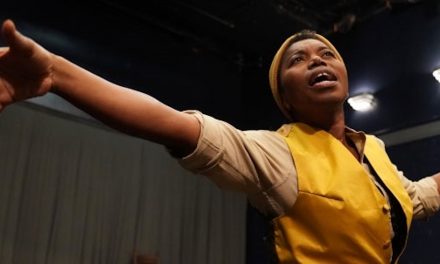