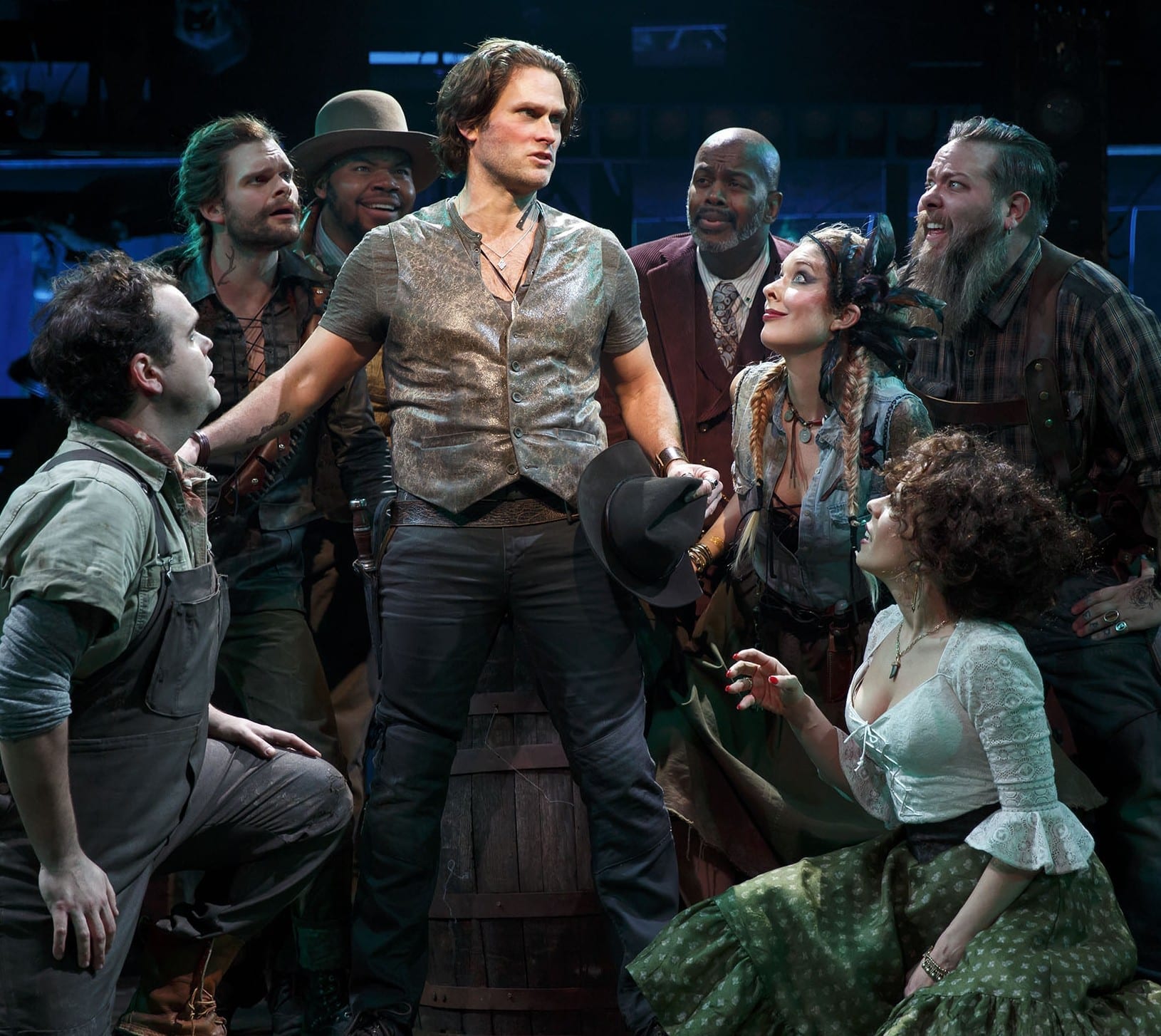 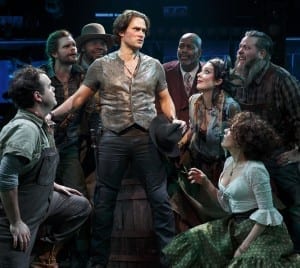 Alex Timbers’s exuberant revival of The Robber Bridegroom, the1975 musical about a band of scoundrels rollicking around Natchez Trace, Mississippi, can wear you out, but it is the happy exhaustion you feel after dancing too fast on a crowded floor.

The story line, based loosely on a Eudora Welte novella, smacks of fairy tale—the old fashioned kind with evil stepmothers, double characters, and, of course, a dolt.  The singing and dancing villains hang about the Trace pounding on one another and preying on feckless travelers.  One of those, Clement Musgrove (Lance Roberts), invites the slickest of the thieves, Jamie Lockhart, who he believes has protected him, to his plantation to meet and marry his daughter.

As the colorful two-faced rogue, Steven Pasquale, as Jamie, brings the heat.   He is every woman’s bad boy—at once hot and funny.  He’s Zorro and Butch Cassidy.  Yes, you fall in love.  Well, as it is only 90 minutes, perhaps it’s lust, but he grabs you early and keeps you close.  Pasquale’s on the shoulders of giants in this role: Raul Julia—hot and funny—was the original Lockhart, and he was replaced by the past master of hot and funny, Kevin Kline.

Jamie Lockhart intends to marry the rich man’s daughter but keep the nubile girl he seduces in the woods as his lover.  The girl, Rosamund (Ahna O’Reilly) is all for him, more than ready to shack up.  They play a sitcom scene at his hideaway as he explains in “Love Stolen” that he finds given love a turn off and only stolen love sexy—the anthem of the bodice ripper.   There’s a tasty layer of recognition here — who hasn’t fallen for a bad boy who only wants you when you don’t want him?

So, while the plot is predictable, the action is salted with some raucous characters.  Leslie Kritzer’s wicked stepmother, Salome, who’s gold tooth is surprisingly sinister as it glints in stage lighting, chews the scenery with Carol Burnett-like conviction. She’s fierce in her evilness, all cleavage and spite.

Greg Hildreth’s Goat is winning and dear.  He is hulking and dim in the Shakespearian-fool sense. It is an indication of how much the audience is in the palm of the actors’ hands, that when Goat delivers a simple line so guilelessly as to send the leading man up, it’s so much fun!   For a brief moment, the actors and the audience are one.

The vaudevillian Big Harp/Little Harp bit—one brother carries the other’s talking head around—offers reliable comic relief. Evan Harrington(Big Harp) gets as much as can be gotten out of a literal talking head.   Andrew Durand’s Little Harp is convincingly smarmy and sinister, but you cannot miss that he moves like a dance master

The music is predictable hoedown stuff but the engaging five man band, on stage and in character most of the time, makes it feel spontaneous.  Alfred Uhry’s lyrics were a bit muddled by an uneven sound system.  The rousing hootenanny stuff rings out fine, but some of the lovely quiet interludes, as when Rosamund sings “Sleepy Man,” are less clear.

The choreography is epic in terms of movement per square inch, with only a couple of minor collisions evident.  The dancing relies on standard reels and barn raising—Seven Brides for Seven Brothers galloping.   The most inventive movement has the cast build and break down all the elements of a walk through the forest.  Hillocks appear and disappear, streams run, ravines threaten as the lovers head to the hideout—all the up-and-down created then erased in the moment.  It put this writer in mind of expert puppeteers managing the fairies in A Midsummer Night’s Dream or the horses in Warhorse.  It was artful and felt effortless.

Alex Timbers’s slick directorial hand polishes up this Robber Bridegroom with humor and precision.  When the lights come up, you realize you are exhausted and  wondering how the performers are still on their feet. 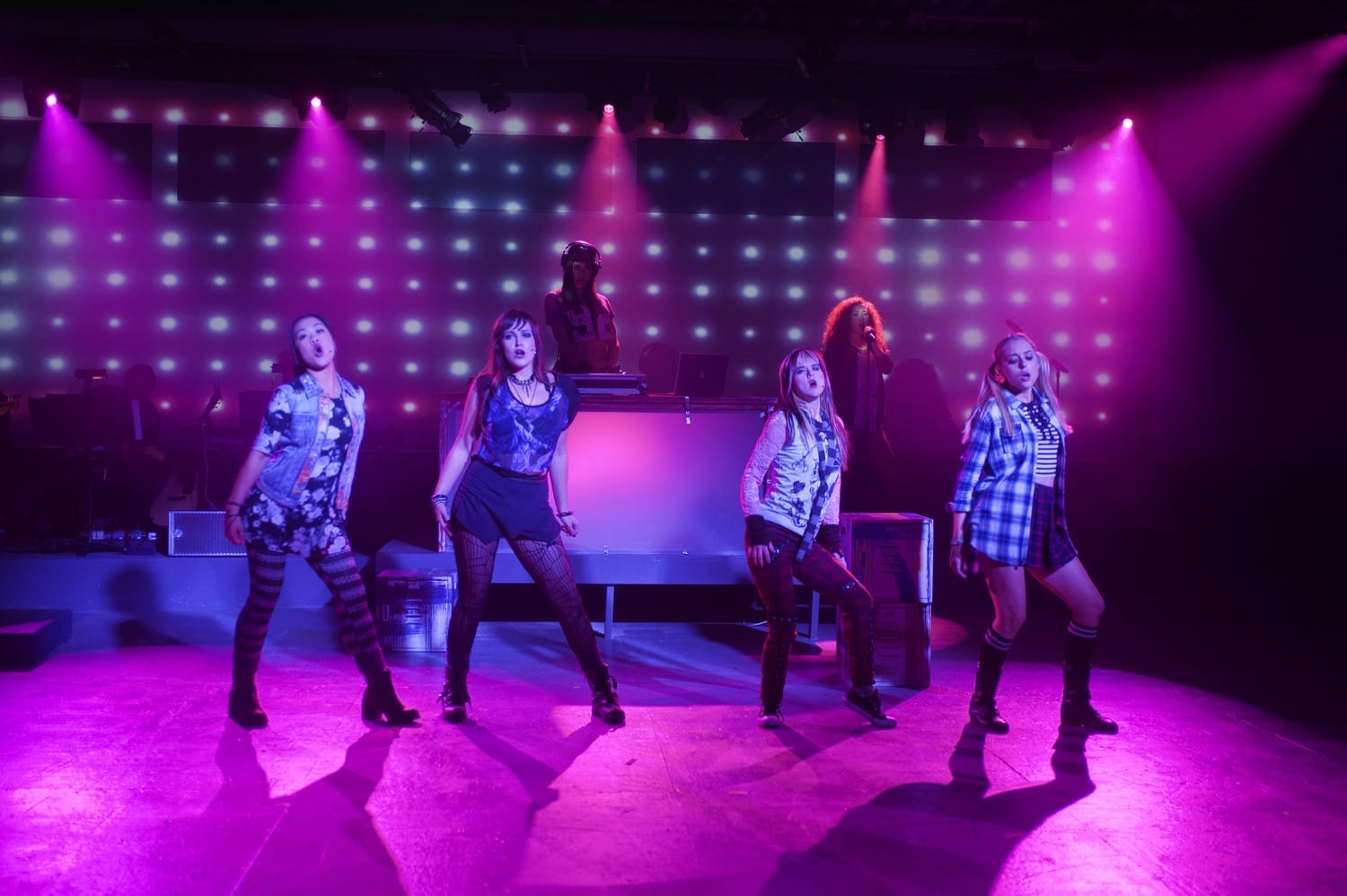 One Day: The Musical