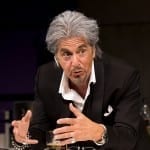 I have no idea.  None.  How did this happen?

Here is China Doll in a nutshell.  Rich man Mickey (Al Pacino) has been separated from his gal Frankie who is installed in a hotel in Toronto.  She was flown there on Mickey’s as yet not fully purchased Swiss private jet that touched down in the States because of a warning light thingy.  When it did, somebody changed the tail number to an American registration.  In doing so it became liable for taxes to the tune of 5 mill (this being a 60 million dollar plane) and when it finally landed in Canada, the plane was more or less impounded, the pilot MIA and the gal – Frankie – holed up in a hotel.  In the course of two very long hours Mickey has to unravel this mess with the assistance of his nearly silent assistant Carson (Christopher Denham), who it turns out is doing more than listening.

Listen – an audience can care about ANYTHING when there is passion behind the story.  Needlework, cleaning horse stalls, and even watching paint dry.  Just light the match of passion and we are hooked.  Which is why we are so disconnected from the goings on in this production.  First of all, David Mamet’s script is nearly lifeless.  He even goes so far as to commit the cardinal sin of having Mickey talk on the phone (using an ear bud so that he looks more like a street person that a tycoon) and repeat everything he is hearing so that the audience will get the gist.  Seriously?  To be honest I have never been a big fan of Mamet’s plays.  I refer to him as the gatling gun of writers.  His characters spew words like they were bullets.  China Doll as given me an inkling into my dislike.  Once the dialogue slows down the story falls apart.  Mamet’s connective tissue appears to rely on speed alone.  Say something fast enough and no one will notice that it doesn’t make sense.

In China Doll there is no speed.  There is no pace, no style, no rhythm.  Whether Mr. Pacino did not know his lines I cannot say, although there were a few obvious stumbles.  But in general his approach appears to suggest Mickey is thinking.  When there is so little to think about, however, this becomes a problem.  This is a man-boy who has lost his toys and he wants everything back the way it was.  Of course there is a problem with the money owed, and then there are some laws that he may have broken, and his gal could be in legal trouble too.  But ho-hum.   Mickey has First World problems.

At the center of this tale is a temper tantrum on very, very slow burn.  Somebody is overdue for a time out and a nap.  And maybe a real problem or two into which we can sink our teeth.

Women Of A Certain Age – Play 3 of The Gabriels: Election Year in the Life of One Family