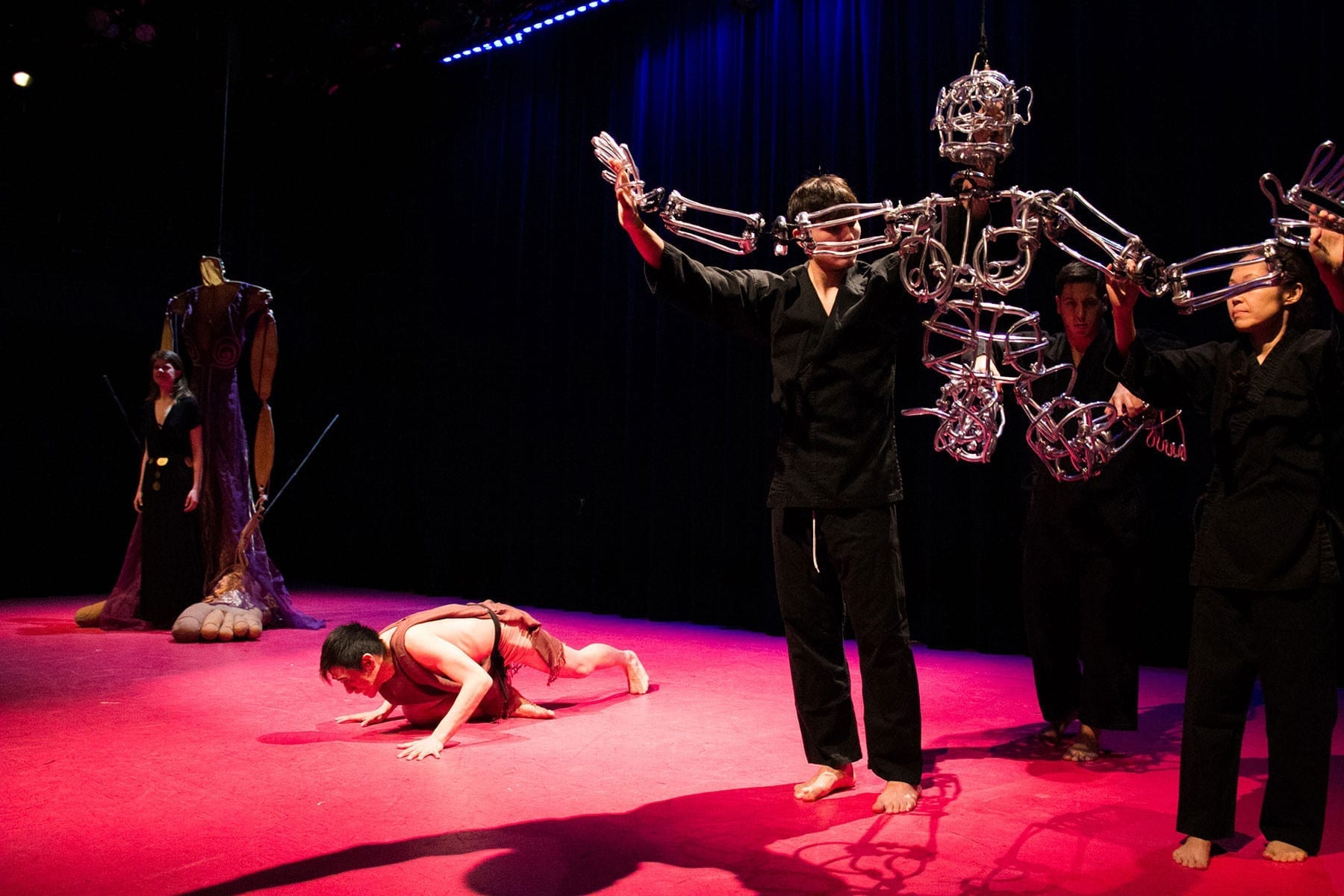 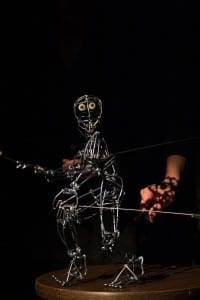 Are we all prisoners of destiny moved along by fate, or is life an open canvas to be filled with the creation of one’s will? This is one of the many existential questions at the core of Loco7’s Dance Puppet Theater Company’s staggering work, “Undefined Fraction,” showing in the La Mama Puppet Series at La Mama ETC.

Inspired by Pedro Calderon de la Barca’s play, “Life’s a Dream”, the company takes on Barca’s classic themes, but unlike Barca, uses no dialogue. The agile performers, live music, and stunning puppets, tell a captivating, visually compelling story, but the only words are sung by a chorus or are delivered by voice over. I sat on the edge of my seat relishing in the mystery of deciphering the almost wordless story.

At the play’s beginning, we are introduced to the heavenly realm. Representing constellations, masked actors on a dark stage hold a glowing rope making synchronized configurations. They also hold clear globes that contain small puppets suspended in motion, supposedly representing humanity on earth. We are taken to the king’s court and meet the Oracle Priestess (Amira Aziza), dressed in flowing white, moving in angular, swift choreography, memorably executed by Amira Aziza.

We are introduced to a lithe performer dancing a ballet inspired piece. She is pregnant, her stomach  outfitted with a glowing, blue globe. We soon learn that she is the Queen (Hope Kroog). The oracle prophesies that her unborn child is destined to divide the kingdom bringing darkness to humanity. In response, the King locks him away in a tower when he is born.

Inside the tower we see the baby prince, Segismundo (Chris Rehmann), represented by a small puppet in a cage, masterfully operated by Rehmann. In Rehmann’s hands, the puppet learns to walk and goes through childhood. He is in the care of a warden, represented by a larger than life puppet (operated by various puppeteers), who treats him kindly and watches him grow up.

To witness a scene so expertly played between two puppets, one larger than life (the warden), and one smaller than life (the baby Prince) is to step into a world where the infinite possibilities of theater are unquestionable. We must believe that in the hands of these performers the telling of any story is possible.

Soon the prince grows up and is helped to escape by Rossaura (Jessica Krueger), a maid who wants revenge from The Duke (José Rivera Jr.). Krueger’s performance is among the play’s most captivating. Performing without a puppet, her movements tell an easily identifiable story of revenge, though the exact motivations are unclear. After making love with The Duke, she dances solo before donning a man’s disguise, painting her face, and setting off for revenge. She learns of the Prince’s story and recruits the warden to help set him free.

When the prince is free, he has an opportunity to prove whether he will live out his fate of becoming an evil ruler or defy it. He is reminded by voice over to be careful because he may find that he is only dreaming, where we hear one of Barca’s themes most clearly. The words, “We live in such an exceptional world that living is nothing more than dreaming…What is life, a thin hope, a shadow, a fiction?” are repeated in looming perpetuity as the prince wrestles with the question of being true to or defying his ugly destiny.

The beauty of the piece rests in the journey’s inescapable uncertainty. Without words (and probably without knowledge of Barca’s play), the audience is left to understand the story by the language of movement, the recognition of human experience and emotion. Granted the program provides many hints including an in depth synopsis of Barca’s play. But if you’re like me, you have no desire to read something so wordy while sitting in your seat waiting for a play to begin. I recommend saving the program reading for the ride home and letting the great, beautiful puppets and masterful performers tell the story at the theater.

If you’re expecting something naturalistic where everything is laid out for you, sit this one out. But if you’re looking for a magical ride that explores themes of destiny, fate, revenge, and tragedy, articulated by puppets, commanding movement, and expert sound and lighting, Loco7’s “Undefined Fraction” is not to be missed.

Before a note from adapters and director, Denise Greber and Federico Restrepo, the program contains a quote from James Baldwin in which he speaks about humanity’s insistent denial of death. He posits that we “imprison ourselves…in order to deny the fact of death, the only fact we have.” Instead, he argues, we ought to “rejoice in the fact of death” and to decide to “confront with passion the conundrum of life.”

Loco7’s Dance Puppet Theater Company steps up to Baldwin’s challenge by presenting bold, imaginative theater that dares each of us to confront the conundrum of life, too. If you’re up for it, I highly recommend a trip to LaMama to join them and boldly step up to the plate. 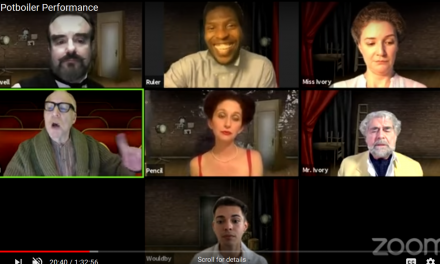 The Potboiler – Part of the Saturday Series at Metropolitan Playhouse 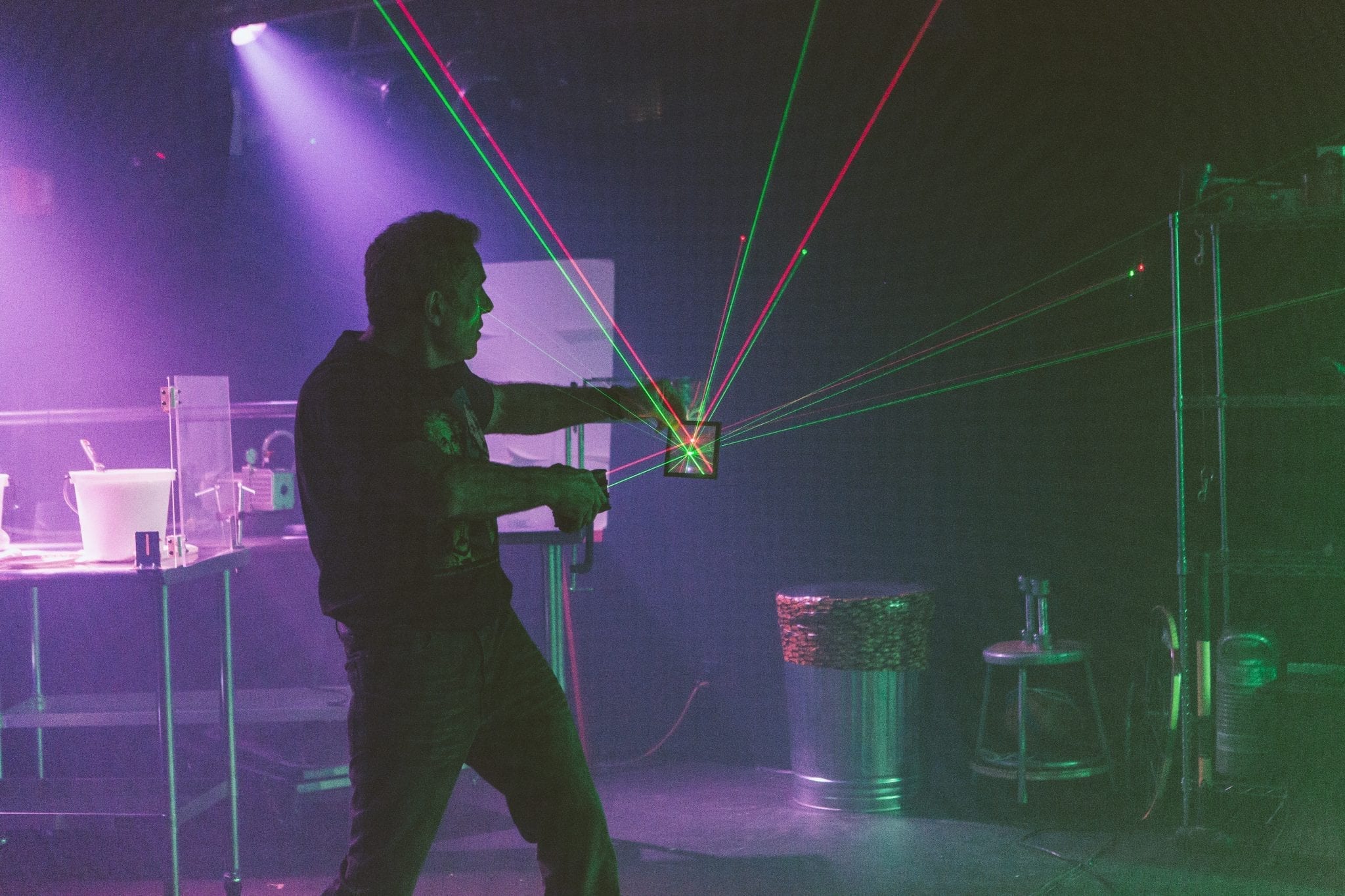