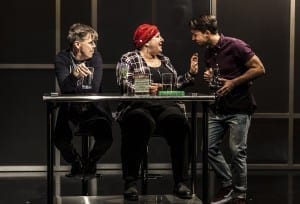 Steve, Steven, Stephen and Esteban.  Good grief. I feel like I am conjugating a verb. And if I were, in this case, the pleasure would be all mine. Well, it would be theirs too – those lucky actors in this production of the New Group’s Steve, by Mark Gerrard, now at the Signature Theater. Three best friends Steven (Matt McGrath), Carrie (Ashlie Atkinson) and Matt (Mario Cantone) have known each other for a couple of decades and are now rallying to boldly face mid life and possible death.

These three are just young enough to have escaped the Aids epidemic and old enough to be on the leading edge of reaping the rewards demanded by Edith Windsor, Larry Kramer and Harvey Milk. Steven and his partner Stephen (Malcolm Gets), although not married, have a son. Matt and his partner Brian (Jerry Dixon) do not, but they do have an extra bedroom for anyone who wants to “visit”. Carrie had a relationship with an unseen Lisa, but it seems to have dissolved with the arrival of Carrie’s other partner, cancer.

Gerrard’s easy flowing dialogue initially has you thinking that this play will be a smart, light and brzzy comedy – an updated verson of Nick and Nora in The Thin Man. Au contraire. Smart, yes. Light, yes. Breezy, check. But once you are relaxed, Gerrard slips you a mickey, and down we all slide into the human heart and its condition, which is very, very, very fallible. All four of these men hurl up against issues of trust and loyalty. When is sex outside of a committed relationship a betrayal. When is it allowable? How do we forgive each other for transgressions that were not planned?

The path of this story belongs to Carrie whose mortal coil is unwinding. While everyone is losing their heads in the work-a-day world each remains fiercely loyal to Carrie. She is in many ways their glue, and although she shrugs off that fact, one wonders what will happen to them when s he is gone.

The dialogue, as I said, is deceptive in its depth. The performances are seamless.   Cynthia Nixon‘s direction is every bit a match for Gerrard’s slight of hand. She directs our attention and our eye with the delicate touch of a brain surgeon. One minute you are focused on the caracter who is speaking and in the next you are aware of the reaction that has been building in the character listening.  What you thought was s your very clear focus is continually diverted and channeled into new streams.   Brainiac fireworks. 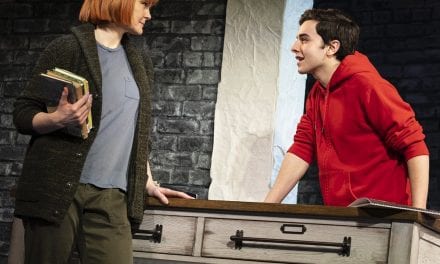 Jesus Hopped the A Train