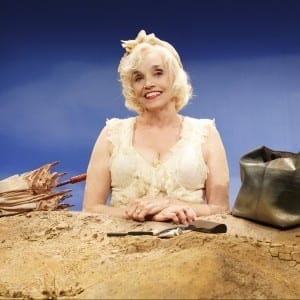 Those of you expecting to see Tony Shaloub in this production of Samuel Beckett’s Happy Days at the Flea Theatre will not be disappointed – unless you were planning on seeing him for more than roughly 10 minutes of this play.  Of which he makes the very most and shows us that at his center he is a pure clown of the very best breed.

Winnie will put up with anything. She is the gift that keeps on giving. She sees possibility where there is only hopelessness. She is an iconic woman, an abused woman, who cannot or will not get herself free. Life has reached out a mighty claw and is pulling Winnie down. Although she can feel the gravitational slide, she refuses to give up. Days are happy.  Mercies are abundant.  Words are small lifelines.  And most important –  she has Willie.  He may ignore her.  He may not choose to listen.  He may not even look at her.  No matter.  He is there.  Thus she has a reason to speak.

I am not merely talking to myself. That is, in the wilderness. Something I could never bear to do – for any length of time. That is what enables me to go on, go on talking that is.

The very, very odd element in this production, however, is that this Winnie does not seem to be talking to this Willie at all. She appears to be speaking directly to us. The urgency that the text presents is never fully realized because the fourth wall has been broken. What is supposed to be an intimate and one-sided conversation loses its punch when it becomes a public recital.

Not only is Winnie speaking to us, she is reassuring us. Sort of like a perky Donna Reed. There are moments where Adams is delicious in her pure positive position. But there are also moments when the frustration of being trapped alive eludes her – and these are critical. When reading the script one can see in Beckett’s direction that the Smile goes off and on, off an on – repeatedly. Not so much here. Even in the second act that presents Winnie buried up to her neck Adam’s smile is dazzling, and her eyes are working overtime to convey her high spirit – to us who are not there.

These two directorial choices by Andrei Belgrader serve to undermine the direct hit that Beckett is delivering. Adams carries on, but she is hobbled. Her acting choices are restricted to a small arena of possibilities. In addition, the set design is nearly pitiful. What is supposed to be earth resonates like the hollow plastic shell that it is whenever anything is plopped on it or when Shaloub has to crawl over it. The second act “up to the neck” burial looks so uncomfortable for Adams that it is difficult to focus on what she is saying. And the seam traveling horizontally through the blue sky gives the set a small town community theatre appearance.

Adams and Shaloub are unflinching in their commitment and persistence in this piece. Not to mention endurance. These qualities alone, however, are not enough to keep this train from slipping off the well-defined track that Beckett created. 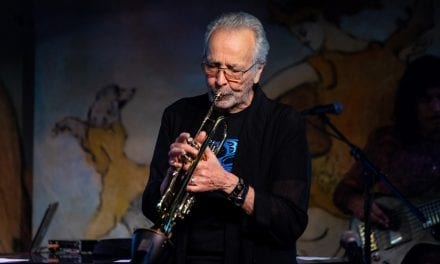 Herb Alpert and Lani Hall at the Cafe Carlyle 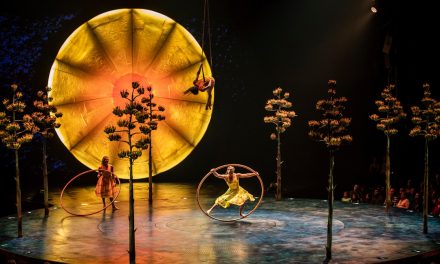