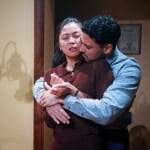 Awake and Sing, now in residence as a revival at the Public Theater, is a show with terrific intent.  I have always been a fan of integrating casts – especially when I read a script that never mentions the race of the character and still the show is entirely white.  Duh.  In this production NAATCO (The National Asian American Theatre Company) decided to change up the cast of this story, which was originally intended to be Jewish, and make them all Asian.  Sort of.

It is 1933 in the Bronx.  The depression is choking people, and families are forced to move in together just so that everyone will have a roof over their heads.  Ralph Berger (Jon Norman Schneider) is a kid in his 20’s who ny rights should be looking for a wife and planning a future.  But with the tiny salary he gets from his uncle’s store he only has enough to hand over to his mother Bessie (Mia Katigbak) for the rent.  Hennie, (Teresa Avia Lim) their restless and angry daughter, also lives at home, but not for long.  In an early and surprising twist for a 1935 play, Bessie discovers that Hennie is pregnant.  Bessie, who runs the household with an iron fist wrapped around a core of fear, produces a husband in the blink of an eye.  That there is no love is of no matter.  What must be done must be done.

Bessie’s husband Myron (Henry Yuk) is a mild stead  fellow who sees more than he will admit and prefers to speak carefully and tread lightly.  Bessie’s father Jacob (Alok Tewari) is a Marxist who lives by reading books, hoping for a revolution and listening to Caruso.  Moe Axelrod is a neighbor (tenant???) who was wounded in WWI and carries the shrapnel and his own disappointment, along with a serious torch for Hennie.

This is an unhappy family fighting for their right to be part of this country and to be hopeful.  They live on little.  They sacrifice much.  Jacob, reading from Hebrew books, admonished them with the phrase from the Bible “Awake and Sing; ye that dwell in dust.” Isaiah 26:19.  But no one seems able to connect the dots.

Although as written this play serves us an undercurrent of hope and redemption all along the way, this cast never achieves that same level.  And, sad to say, part of this is due to the casting.  The rest would be directorial.  Alok Tewari is an odd choice to play the father of an Asian woman.  His Yiddish accent is jarring in this context and could easily have been changed if he were an Asian character – they had revolutions on that continent as well didn’t they?  In addition he shuffles instead of walking to indicate that he is an older man – when clearly he is not.  David Shih is given the task of performing a stumbling lost soul who lost the lottery and ended up married to Hennie – who is in love with Moe.  In this performance he takes on a Jewish accent and unimaginative mannerisms that are no more than character gestures.   Avia Lim, while the most animated and observant performer also saddles herself with an uneven accent that is part Bronx Jew and part I don’t’ know what.

The other actors don’t fare so well either.  Accents come and go, and we are left dumbfounded as to who these people really are.  In their attempt to integrate this iconic play, NAATCO didn’t go far enough.  They held on to elements they didn’t need and refused to examine the new possibilities they proposed with anything more than lip service.  What was intended as an investigation of an alternate cultural and racial point of view – something that New York theatre can use in spades – never made it out of the starting gate.

Awake and Sing by Clifford Odets Directed by Stephen Brown-Fried

She Stoops to Conquer