Side Show. Like the latest incarnation of Les Miserables this show comes close to being a vocal competition with soaring voices climbing to celestial heights, or in the case of David St. Louis, just about blowing the roof off the joint.

Side Show is based on the story of the Hilton Sisters – Violet (Erin Davie) and Daisy (Emily Padgett) who are discovered by a down-on-his-luck theatre promoter, Terry Connor (Ryan Silverman) who sees in them something no one else does – possibility. Well, Violet sees it, but then she has a twin, whose life support system she shares, who does not feel the same way.

The twins were born in England, deserted by their mother and left with a woman who set them up for viewing until she met Sir (Robert Joy) who had other ideas. He brought them all to America where the Hiltons became the stars of the side show he created.

When Terry and his side-kick Buddy (Matthew Hydzik) who is much less enthusiastic, offer the women a chance, they take it. Not without some thought about the friends they are leaving and the risk they are taking.  Sir is furious at loosing his star attraction, and is even more so when they take him to court to be released from his guardianship.  When they leave, they also take with them their unofficial guardian Jake (David St. Louis) who, anyone can see, is in love with Daisy. But the combination of her being a conjoined twin and him being black doesn’t give this relationship much hope.

We travel with them as they climb the ladder of success, but soon their hearts and heads want more. And more is not possible. No matter that Terry is head over heels for Violet.   Buddy, although his heart is elsewhere, even offers to marry Daisy to make her dream come true.  When the marriage is set for half time at a football game, the spectacle of their lives explodes.  Even the possibility of an operation is an offer not to be considered.  All the twins have and will ever have is one another.  Everything is for naught because the circumstances are too grave, too high.

Along the way we are treated to some spectacular, if uneven, music and voices that are astonishing. There is some spiffy dancing and a stunning musical fantasy between Davie and Silverman.  Javier Ignacio has a cameo playing Houdini and a voice of pure silk that covers I cannot even count how many octaves.  As I mentioned David St. Louis has a voice that makes the audience gasp in spite of the fact that his acting chops are a few paces behind his vocal skills. Davie and Padgett have duets that are arias all on their own.  These two women play people joined at the hip, but when they sing you understand on a visceral level that they are joined at the heart.

The story itself lacks punch. We have moved beyond the Side Show era – as we have moved beyond many others – prohibition, the times when being a gay was illegal, and way beyond the dark days when Catholics were pretty much in the same in the same boat. So as each character is introduced in the opening number by “Sir” the “ringmaster” of the side show there is a sort of ho-hum about it. No one is really threatening.  Chicken blood isn’t real – and the lizard man’s costume fits him so poorly it has wrinkles in its wrinkles.

This big old fly in the ointment, however, is that the conjoining of these twins does not register not on the truth-o-meter. Their commitment and partnership is never questioned, but the fact that they have to dash about the stage holding hands so that they don’t fly apart is not so convincing.  You get the feeling that one good tug would separate them.  Because this is the center around which everything revolves, it’s instability undermines the production.

Still, there is a great deal of talent prancing around on that stage, and you could do worse than share an evening enjoying them all. 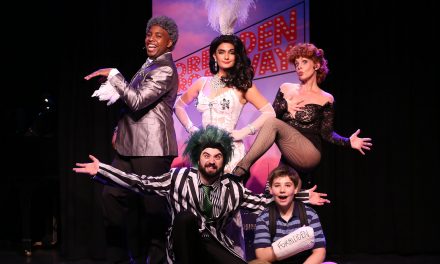 Forbidden Broadway, The Next Generation

Curse of the Starving Class