This production left me speechless, and not in a good way. I am a fan of Walter Mosley’s work as a novelist. He is a storyteller whose plots are many layered and whose characters refuse to fit in a box. With many of the novels you can almost feel them wander out of sight and raise hell in their own pocket of the Universe.

In The Lift, Mosley has also given us layered characters who have a surprise or two up their sleeve or pant leg, as the case may be. The actual tale, however, is so poorly written, that it does not stand up to the mildest scrutiny. It collapses under its own weight while we watch.

Two people who work in the same law firm, but are only meeting for the first time in the elevator, are marooned there when terrorists set off a bomb on one side of the building. Tina Pardon (MaameYaa Boafo) and Theodore “Big Time” Southmore (Biko Eisen-Martin) are the unfortunate pair who spend the better part of 90 minutes locked in the elevator. This is supposed to be a life and death situation, which it does become, but you wouldn’t know it from the dialogue or the performances.

Unlike 9/11 this building does not come tumbling down. Instead it shifts occasionally causing the elevator to creak. Of course the fact that the elevator creaks from the moment the actors enter sort of undermines the latter noises.  We learn later that this elevator is supposed to be rock solid, prohibiting noise to escape and mobile phone usage. The elevator we see however is flimsy. Not only does the floor creak, it is not tacked down with any degree of certainty. Unsettling for the actors who have to work on it and distracting for the audience who has to watch.

Once the situation is established we get lost in the milky dialogue that refuses to let us in to these two people who are literally balanced at the end of a cable 30 floors up. Nothing the actors do or say for the rest of the play amounts to a molehill of import.  Southmore makes it clear that he has a “condition” and “all this excitement exacerbates” that condition. Really? As the building creaks and groans, Pardon’s only response is “What was that?” When smoke that we cannot see is detected, Southmore – in a move that is contrived and awkward – strips down to his bare chest and offers half of his t-shirt as a smoke mask. As the time passes these two speak like two folks at an employee mixer than two people afraid for their lives. Each of them has some pretty serious pasts that could easily be a play in themselves, but they don’t make a dent in this story, such as it is.

Time passes, and everyone in the audience grows older.

Escape routes are examined. Even this is a does nothing to perk up our interest. Watching them fake pulling a metal sign off the wall is actually painful. Especially when the strips of double sided tape are revealed still attached to the wall when the sign falls to the floor. When they finally get to the roof of the elevator their first reaction is “It’s beautiful here” – um hello? Survival anyone???

This is one of those shows that, sad to say, announces its coming failure from the opening scene where Pardon and her friend Noni Tariq (Shavonna Banks) are crowded onto a corner of the set that looks more like a subway stop than a building lobby. The conversation (when the actors remember their lines) is stilted and not believable. A few minutes later, in the elevator, the CEO of the company arrives. John Thomas Resterly (Martin Kushner) proceeds – unbidden – to unload a series o racial remarks that are off the reservation. All the while, Pardon clearly tries to hide her identity. But she does so by putting her flimsy scarf over her face like a modified Muslim arrangement. This is a move so astonishing it could be funny – but it is not meant to be. It is also in this scene that the projection on the back wall that tells us the elevator is going up (how long does it travel four floors???). When Resterly exits they hit the button to go back to the 31st floor, but the projection didn’t get the memo and it still has the elevator going up….

This production fails on every level – writing, directing, all the elements of production design, and acting. It is the Trifecta Plus of disappointment. What is even more inexplicable is that it had a run at the reputable Crossroads Theatre last spring, and it was deemed worthy of a second production.

Save your time and money.  Go elsewhere for a good time. 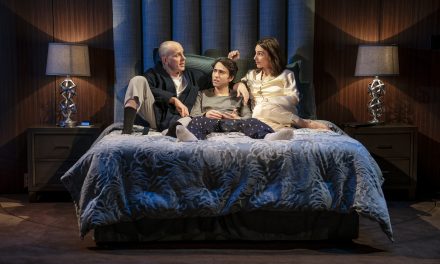