The List (The Greatest, Most Ambitious 100 American Movies Mash-Up Parody Ever Stitched Together)

*disclaimer-please take plot description with a grain of salt, there was A LOT of content.

Once in a while a show comes along that can easily be reviewed in one sentence: GO SEE IT NOW! Since I am not sure if I am allowed to end it there I will elaborate, but The List, my friends, is one of those shows.

Before I even attempt to explain the plot of this show, I am going to reiterate the title in its entirety: “The List (The Greatest, Most Ambitious 100 American Movies Mash-Up Parody Ever Stitched Together)”. A title like that exudes confidence, creativity and a “just go for it” attitude that encompasses what this show is all about. But what is this show actually about? In broadest terms, I guess the show is about Oskar Schindler (Matt W. Cody) trying to create a list of workers he is recruiting with the help of his faithful assistant (Mallory Hawks). But then over here we have the real Evelyn Mulwray playing the deceptive victim with unquenchable sexual desires. And over there we have Nurse Ratched (Amanda Huxtable) weaving in and out of the role as caretaker in a not so caring manner. Then somewhere in the middle we return back to Oskar accompanied by Forrest Gump and Princess Leia on a train heading towards…any place that has cinematic value.

From the very beginning to the very end this show reeks of cinematic value; and I mean that as the highest compliment. Bryan T. Donavon has created a script saturated in film references and puns that would satisfy the hungriest of film buffs. And he has enlisted an incredible group of actors to bring his words to the stage/screen. At a pace and volatility that can best be described as “Gilmore Girlish”*, these four performers brought to life (and death) countless movie icons. Sometimes they were spot on, sometimes they were so off they were on, but either way they were always immensely entertaining and so very funny.

I saw this play with a friend who loves movies just as much as I do, if not more, and as much as we both enjoyed it there was only one thing we wished had been different. We wished we had seen more of the movies referenced, but really that’s on us. To be honest I didn’t need to know the film to find a reference funny, it was funny regardless, but in those moments I wanted to appreciate what had occurred as much as the guy next to me. Or as much as I appreciated it when I knew the movie making its way into the fleeting spotlight.

*popular early millennium t.v. series about a mother and daughter who live in a very small town and talk a mile a minute about everything and anything.

The List (The Greatest, Most Ambitious 100 American Movies Mash-Up Parody Ever Stitched Together) by Bryan T. Donovan; Directed by Regan Adair. 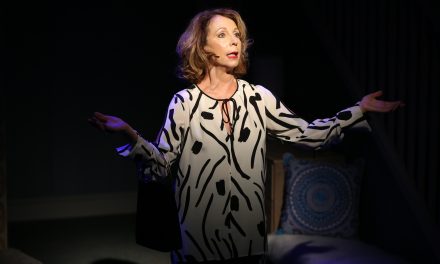