There is a lot of pretty flesh showcased in Lancelot, and it’s very up-close and personal, as the Gym at Judson seats the audience in two spare semi-circles of folding chairs that ring the performers.

That flesh is draped on a bare-bones production of a powerful play.  Playwright Steven Fechter takes another cut at dramatizing pedophilia.  His Woodsmanaddresses the post-prison adjustment of a child molester.  In Lancelot, the plot hangs on a long ago seduction of a sensitive thirteen-year old boy by his twenty-six-year-old art teacher.

As the play opens that Oklahoma boy, now twenty-five and a proud manager at the local United Goods store, is motivating his employees, bribing them with pizza and feeding them the line — the world out there’s going to hell in a hand basket but United Goods is our port in that Gomorrahan storm.

Ryan (Stephen James Anthony) is buttoned up and working hard to convince himself and everyone else that this life is the good life.  Ryan, of course, protests too much, and eventually tells us how grim he finds manhood in Oklahoma.  The actor has chops.  We believe him as this rigid, automaton.  And we believe the several ‘ages of man’ he gives us later.

Lulu Fogarty plays Tara, the girlfriend, who has been trying to get Ryan to the altar for some time.   Fogarty, who grew up in Greenwich Village, affects an accent that is more Orkian than Oklahoman.  Perhaps she’s playing it for laughs.  At any rate, the tortured vowels and cadences outshout any possibility of subtlety or vulnerability.

Fourteen-year-old Grant Riordon plays the Boy.  He skate boards onto the stage, and it takes a few minutes to see him as Ryan’s long-ago self.  The towheaded boy is beautiful and sensual, maybe a bit feral.  It is difficult to believe he grows up to be our very straight laced — and not especially handsome — hero.   But of course, that’s the thing; Ryan’s been smothering that beautiful boy for a decade. Riordon is appealing and manages — one assumes through deft direction — to inhabit a third space: He’s there and not there.   He urges Ryan to “hurry” outside as “she’s waiting for you.”

“She” is Ginger.  Romy Nordlinger struts and primps Ginger before “Ry” the boy she once seduced and now the man she’s come back to reclaim.  She is feline and confident and quick to use the past to unwind his defenses.  (“I recall you liked big breasts.  You were crazy about mine.  You’d push your face down into them like a parched boy drinking in a cool stream.”)  Nordlinger and Anthony establish a polished push-me/pull-me connection as they approach and withhold.  The tension is palpable between them.

The staging in Judson’s stark gymnasium space has the verve of Blackwatch at the old St. Ann’s Warehouse, using all the space inventively.  Director and designer Thom Fogarty trusts the audience to fill in the blanks and absorb the efficient scene-change blackouts.  (This is not to say that Lancelot would not benefit by richer production values in it’s next iteration.)

Fechter’s script is tight and layered, and speaks to big themes about art and talent, gender and morality.   His characters are complicated and do not happily resolve themselves in ninety minutes.  Is Ginger corrupt or redemptive?  Is Ry irredeemably damaged?

There are wonderful exchanges that play on several levels.   When Tara discovers Ryan was not only raped (statutorily) but he also stabbed Ginger’s enraged husband twenty-seven times, she’s incredulous, and he delivers a very funny line with aplomb.

RYAN: He was a big man. It was a small knife.

There is real theater here. Try to get a ticket. 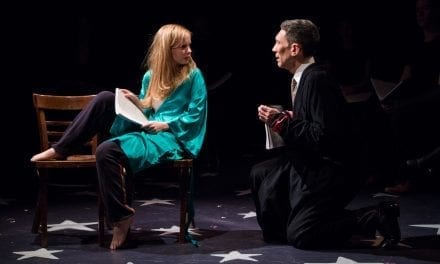 The Land Of Promise