A title is a funny thing. From obvious to ironic to everything in between, it is sometimes all you have to go on. In this case the title appears to be working as a decoy, a title that fits perfectly.

Rachel (Eilis Cahill) is in a bad place. Technically, she is in Brazil for the World Cup which is a pretty desired place. But for the purposes of this story, she is in a very bad place. Trying to recuperate from an alcohol induced head injury and the death of her father; all she wants is some space and quiet. Both are taken from her when her father’s dear friends, two men (James Glossman and Mike Boland) who have been in her life forever, come to check on her. If that wasn’t enough, in walks her evil stepmother (Linda Setzer), whom she didn’t even know was her stepmother until a few days (hours?) ago, a few days later coming to pay a most unwelcomed visit. This is the tale as we are led to believe. The truth? That’s a whole other story.

There are two things that I feel need to be divulged before I insert my thoughts and feelings. One, essentially every character, either present or mentioned, is an author. Two, none of the four characters are blood related. Right off the bat we learn that Rachel is in distress and Richard and Alexander care deeply for her. To create and maintain the chemistry that these three characters share in such a short amount of time is a testament to both the cast and crew. Even Linda, who gets thrown into the mix much later on, brings an element to the dynamic befitting for this crowd . Their relationships are complex and twisted and messy yet unwaveringly grounded in love. A love that exceeds unconditional, and thus is all too rare.

Speaking of rare, another intriguing aspect of the show is that this is a story told by the characters on behalf of their fellow characters. In any other situation it might have seemed odd that these characters went off on lengthy detail oriented tangents about specific moments in each other’s lives, but for a group of authors it’s second nature. Further on that point, whatever concern I had about a character’s behavior being abnormal or erratic throughout the show was almost always suppressed through additional revelations. And as for the outbursts that were not explained? That ties into the notion that I feel sums up Futebol in a nutshell: when you are with family, you don’t need to explain yourself.

Futebol is the kind of show that ends way earlier than you would hope. Or at least that’s how it was for me. There is something about this little story with these grand issues that pulls you in and keeps you long after that final dim of the lights. 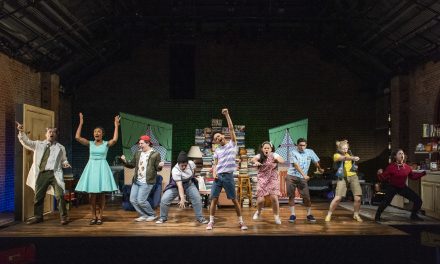 LOVENESS: I WILL ONLY LOVE YOU ONCE