I just figured out why the title for the play is Antony and Cleopatra and not the other way around. DUH!  Antony is the mover and shaker here.  Cleopatra is the one who has to stay at home and play with her toys.  At least that is what is going on in this production, edited and directed by Tarell Alvin McCraney, at the Public Theater.

McCraney’s take on the play is really a man’s world.  Antony (Jonathan Cake) is the one with the passion for love and war.  When he hears that all is not well since he took a sabbatical in order to be with Cleopatra (Joaquina Kalukango) 24/7, he works his way back to Caesar’s camp. Although his wife is dead Antony still has a flame burning for Caesar (Samuel Collings gives an immaculate performance as the Emperor).  So intensely are these two men connected that it is a simple matter for Caesar to offer the hand of his one and only sister Octavia (Charise Castro Smith) to Antony in marriage.  Antony, though still in love with Cleopatra, sees a political win being handed to him and takes it.  No matter that Octavia will be betrayed within a nano-second – or however long that sort of thing took back in the days before instant everything.

After the betrothal, the men head off to squash a rebellion and in the process have some serious male bonding time that involves a lot of drink and dance and some very sexy wrestling.  The choreography by Gelan Lambert is nearly ethereal and adds a sense of heightened fantasy to the story as does the music by Michael Thurber and the addition of choral work. While Antony invests his time in corporeal pleasures, Caesar prefers the cerebral world where he is safe to rule unimpeded.

Soon Antony is back in the arms of his beloved, but this time he has fallen afoul of Caesar.  What one does to Caesar’s sister one does to Caesar.  Caesar does not like to be screwed – in this particular way.  Soon Antony is on the defense and chooses to make his stand on the water.  Despite all his advisors pleas against it.  He is defeated, and the shame is heavier than the fact of it.  But in this case he is doubly shamed because Cleopatra’s barge, come to watch the battle, retreated without explanation.  Antony followed his loins and not his head.  He left a battle to chase his beloved.  Bad form, fella.

Antony  is roused by his own sense of honor and decides to take on Caesar one more time.  On this day he stays the course, but with no better outcome other than honor kept.  Meanwhile, Cleopatra, having been solicited by Caesar to accept his guardianship, rejects the idea of defeat and takes to her chamber.  She bids that Antony be told she is dead.  Teach the boy a lesson.  Antony, however, is not for the teaching.  Before she can reassure him, Antony takes his own life.  Cleopatra, alone and conquered, hitches a ride on the asp train and dies as do her servants.

There is one glorious moment in the play when Caesar is told of Antony’s death.  Says he

The breaking of so great a think should make
A greater crack: the round world
Should have shook lions into civil streets,
And citizens to their dens; the death of Antony
Is not a single doom; in the name lay
A moiety of the world.

In that moment Collings scoops up  sorrows past and yet to come.  We feel his loss, every ounce of it.  Being an Emperor is a lonely job.  Indeed it is this relationship against which all others are measured.  In this case, however, Antony and Cleopatra are found wanting.  For one thing there is little chemistry between them.  The clinches are obligatory and without juice.  And for another, Kalukango never achieves the elevation of a queen.  Princess perhaps.  Bold, petulant, self- centered, fickle.  Truth be told I do not know what Mr. McCraney edited from the text.  Whatever the case, the choice to water down the rich wine that was the Queen of the Nile robs the play of its majesty and magic.  In addition, the white cotton empire gowns that Kalukango and all the other women wear are frivolous.  A lovely garment for a summer evening, but in no way the sartorial sign of a queen.  As well, the music’s Caribbean/African flavor (though beautifully performed) is an odd choice set against the 18th century clothing of the soldiers and the women’s gauzy gowns. There is of course something to be said for expanding the reach of a play to include other cultures.  Here, the combination of accents, music and costumes, however, felt as if the concepts were never fully developed.  It was change for the sake of change, and the story was secondary.

And PS: once again, this production, like so many before it, was directed as if for a standard proscenium stage.  Though many of the actors did their best to include the audience right and left, I’m guessing that the folks on the extreme edges of those areas saw more butt than face.  Such an easily accommodated oversight that happens all the time.  The administration folks should come one down and watch this show from the sidelines sometime.  Nothing like a change in your POV to perk up your day.

By William Shakespeare; edited and directed by Tarell Alvin McCraney 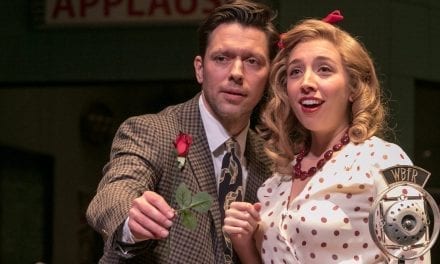