The Ride, Holiday Edition: Oh? What? Fun? It is.

If you immediately turn off the TV in a NYC cab, to look out the window because you appreciate that the aesthetic, ecstatic buzz of street life is better than anything on TV – you too might have been as intrigued by THE RIDE as I was.

It’s a brilliant concept: A tour of the town with actors suddenly popping-out of crowds to perform dynamic vignettes in key spots. So I was totally jazzed for boarding the festive, custom bus with plush stadium seating, facing a full floor-to-ceiling window to view my own neighborhood (Midtown Manhattan) in traffic…as theater!

And suddenly, uh-oh…clearly I am not the target audience. This is a frolic for capital-T Tourists who might enjoy an alarming amount of cheer, at very high volume, for a very high price. While at the same time, I was impressed by the hosts for my particular tour, the improv comedians Stuart (Jake Keefe) and Julie (Leslie Ellis) who led the romp with such indefatigable energy, a non-stop landslide of patter, trivia, alerts and insults gushes for 75 minutes.

A seesaw of love/hate grumbles within me. I want to bolt. But I settle down and accept that the aim of The Ride is to recreate a comedy club on wheels. Aha! Now I can tolerate how snarky it is. (And how meta-snarky it would be, for me to be snarky about Snarky.) The first staged-performer we encounter is a young man in Times Square, wearing 2014 eyeglasses and a glitter hat, with the hosts effusing, “He only has to wait 43 days til New Year’s Eve…but luckily has the sewer to use as his own personal restroom.” In between the staged acts, the heart of the tour is to make heartless fun of strangers – a classic urban sport. Or to be frequently exhorted to wave at passers-by, who (spoiler alert) sometimes wave back.  By the time we happen upon a street sweeper who suddenly erupts into an astonishing tap dance in front of the Grace Building on 42nd Street – and our hosts exclaim, “That was awesome! And it’s ‘Only in New York!’ Where no one cares.” I want to holler, “Not true! Lots of us care!”

But I let it go. I make a deliberate decision to view The Ride as a vacation from my expectations. Who am I to demand tourists be given substantive experiences? Sometimes a lark is just a lark. And what a marvelously seductive and ambitious lark this is! The elaborate coordination required to pull off The Ride is mind-boggling: The vehicle, the hosts, the talent, the sites, the traffic, the weather, and above all, the random swerve of the unknown – ALL have to coalesce. Fortunately this shift in my attitude arrived just in time to allow myself to be enchanted by the surreal vision of an LED-lit ballerina pirouetting with a skateboarding stuntman as The Ride veered around Columbus Circle.

And in that moment, The Ride was no longer “just a show to review” but an inspiration for an ongoing project. From now on I have internalized it as some New York Artist’s Duty to forever hallucinate performances in random spots all over Manhattan –and when possible, perpetrate them.

By the time The Ride pauses for a dynamic sax player and mellifluous crooner urging us to sing along to Sinatra’s “New York, New York” in front of the Hotel Wellington, in spite of myself, I sing. 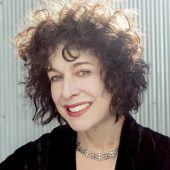