This one has me mystified.  For the entire two hours of this show I was grasping for a foothold.  I kept waiting to find a place where I could enter and be allowed inside more than a step or two.  And, with the exception of a beautiful scene between Mary Louise Parker (Elizabeth Gaesling) and Chrstopher Innvar (Theodore Gaesling) I never found solid ground.

This is the story – set in 1917 – of a young man, Arnold Gaesling (Brian Cross) who is the only one in the Gaesling family ready to admit that the Emperor has no clothes.  When his beloved father Teddy died eight weeks prior (the above mentioned scene is a flash back), it was Arnie who was given the job of handling matters.  As “the man of the house” because his older brother Duncan (Evan Jonegkeit) was away at boot camp and his Uncle Max (Danny Burnstein) had been recently ostracized by the citizens of his home for 20 years because he was German, it was Arnie who took on all matters practical and financial.  What he uncovered was a mare’s nest of problems, the upshot of which was that the family was broke.

This news, while never welcome anywhere any time, is particularly unwelcome on the occasion of the family gathering at their lodge outside Syracuse.  Duncan is about to be shipped off to war, and it is the last time everyone (except Teddy) will be together.  It is the time for the annual hunt, an occasion that Teddy loved, so this get together is also a memorial service of sorts.

With the addition of the mercurial Victoria Clark who plays Clarissa – Elizabeth’s sister and Max’s wife, as well as the compelling Jessica Love as a Polish aristocrat refugee from the War who is the new maid Viktorya Gryaznoy – we have all the makings of a Chekhovian drama.  A rich family falling from grace refuses to listen to the truth of their dilemma, the beat of the coming war, or the flocks of geese migrating overhead. They are being cared for by one young woman (the rest of the staff dismissed for financial reasons) who has already fallen from grace and truly knows what it means to have nothing.  Within that circle of story there is Max – the ostracized German – and the wife he loves, Clarissa the tea-totaling Methodist (“We are only unhappy when we are rich”) who are mourning the loss of their only daughter.  Arnie is the child who never feels heard. Duncan is the golden boy about to be toppled.  Elizabeth is the sun about which they would all like to orbit, but who is without a heat source of her own since the death of Teddy.  Everyone is off kilter seeking a center.

But somehow Mr. White manages to remain on the surface of things.  We move from one event to another as if we were watching an old newsreel.  Because of the beautiful scene with Innvar and Parker we see the light and life this couple shared.  But it becomes a fading memory when we are faced with the stilted goings on in the mourning Gaesling household.  What was lost is conveyed in words only.  There is little heart in the matter.

It is as though someone started out with the makings of a great soup: a fantastic stock and all the right ingredients.  Then, for some reason the chef placed the pot under the faucet and opened the tap a bit and was called away for a phone call.  The result is a watered down dish that will be served but not appreciated.

THE SNOW GEESE – By Sharr White; directed by Daniel Sullivan

An Evening With Molly Ringwald 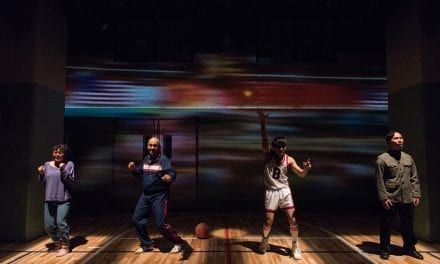 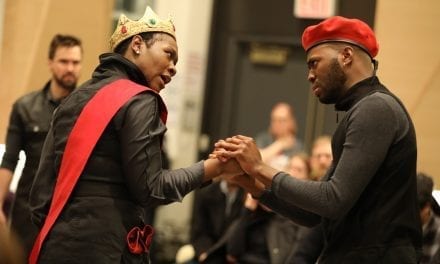